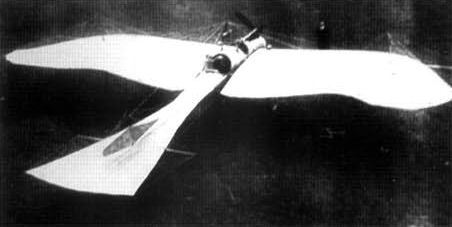 The extremely bird-like two seat Etrich Taube, or Pidgeon, that first flew in November 1909 was to become Europe's most successful aircraft in the period prior to World War I, certainly in terms of numbers built. Designed by the Austrian, Igo Etrich. the original Taube was powered by an 85hp Austro-Daimler in-line engine, as seen here. Note the complexity of rigging and control wires employed on this aircraft, that relied on wing warping, rather than ailerons. Popular from the outset with pilots because of its easy handling, the Taube had already sold in some numbers when in 1911 its order book was to receive an instant boost, following the type's selection as Germany's standard two-seat reconnaissance and training aircraft. Ultimately, around 500 examples were to be licence-built in Germany alone, by a number of manufacturers led by Rumpler. Progressively re-engined with various types of up to 120hp, the Taube stayed in front-line service until well into 1915, while, as a trainer, the type was still in use in 1916.

A Rumpler Taube, serial A.69. It was this model which was flown over Paris in 1914 by Lt von Hiddessen when he dropped the first bombs on the city.

THE "FOREIGNERS": A view of Hall II, showing the British section (in foreground) and, in mid air, a 1914 Grade monoplane and a Rumpler Taube.