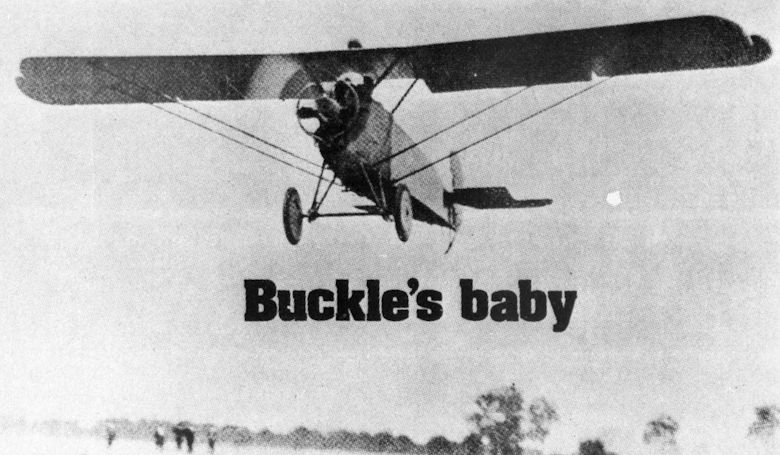 The splendid article about the Blake brothers’ home-made aeroplane, in the October 1978 issue of Aeroplane Monthly, reminded me that a similar machine ДальшеMore>>> was constructed at about the same period by a Mr S. L. Buckle, and successfully flown by a pilot friend Mr J. S. Tanner. This, too, was a parasol monoplane, completed in 1929 at a cost of £17.
The enthusiastic builder was able to get started when he obtained about a dozen Sopwith Snipe wings, complete with ailerons, a couple of Snipe centre-sections, rudders, elevators and a tailplane, all free of charge. The best pair of wings and centre-section were used for the intended monoplane, being broken up for their bolts, strainers, wires, etc. No stress calculations were made, safety considerations being catered for by measuring parts of existing light aircraft and adding a little!
As plenty of wire and strainer were available after stripping down the unwanted wings, it was decided to make a simple braced fuselage. A rectangular fuselage was built up, 2ft 6in deep and 2ft 3in wide at the front, tapering to a foot-high knife-edge at the rear. The cockpit was set five feet from the nose, where the rectangular engine bearer frame was situated, constructed of 1 1/2in square angle-steel. By using a horizontal line along the top of this fuselage, the need to set up a datum line for trammelling was obviated.
The nose as far back as the cockpit was decked with plywood and strengthened by cross-bracing wires, the plywood being glued and screwed in place. Similar treatment was given to the last three inches of the fuselage. The Snipe wing was attached to the fuselage by inserting the two outer strut sockets into tubes and attaching the two inner strut sockets to cables which ran to anchorages beneath the fuselage, made by sandwiching a strip of steel strip between two pieces of ash and attaching the wires to this steel strip. Two drift wires were run from the engine plate to the tops of the rear wing struts, and two more were run from the engine mounting to the centre section.
The four-gallon centre section petrol tank came from an Avro, and the joy-stick came from the same source, being connected to the elevator via a countershaft and crossed cables. The ailerons were also directly operated by cables. The wing had a span of 30ft 10in.
The power unit presented a problem, money being at a premium, until a 45 h.p. six-cylinder Anzani radial was found and bought for the princely sum of £4. It had no magneto or carburettor. The former was quickly found, but a carburettor had to be adapted from one from an Armstrong Siddeley car. The lack of a suitable propeller nearly stopped the project. However, as in Mr Blake’s case, the old aeroplane sheds at Brooklands solved the problem. Therein Mr Buckle discovered an airscrew that had originally been used on a Gnome-engined Short biplane dating back to 1912. This cost a shilling (5p), and was borne home in triumph.
By lopping more and more off the ends of the blades the Anzani was coaxed up to its maximum output of 1,400 r.p.m. Zenith advised about the correct choke-tube and jets for the converted carburettor, and test running was done with the engine mounted on the fuselage, which was suitably weighted down. The prop was modified until it was less than 6 1/2ft in diameter to enable the engine to attain full revs, but this resulted in the circular back plate by which it was attached to the mounting frame wobbling alarmingly. This was cured by cutting a new circular plate of 1/4in steel. The engine exhausted into the original semi-circular collector pipes.
The wings and fuselage had to be re-covered with fabric, and doped. A heavy but robust Sopwith Camel undercarriage was used, and was attached with fish plates. A false longeron beneath the main longerons stiffened things up, and elastic shock-absorbers were contrived. The tail plane was attached to the fuselage by stirrup bolts running from top to bottom to give a position incidence of one degree, the rudder post being merely a piece of steel tube bolted to the end of the fuselage. The leaf from an old car spring served as a tail-skid.

A question of balance

Mr Buckle now had something resembling a serviceable aeroplane for an outlay of £17. The problem of finding the cg was solved by balancing the fuselage, complete with someone in the pilot’s seat, across a pole. To arrive at the centre of pressure a test book was studied and the centre section adjusted to accord with the four degrees angle of incidence decided upon. It was mounted on four stout spruce struts, which were attached to the longerons with 1/8in plates and braced with Rafwire.
The completed aircraft was found to weigh 800lb and was 22ft long. Power loading was estimated to be 17 3/4lb per h.p., and the wing loading to be 5 1/2lb sq ft. It is interesting that the most costly item in building the aeroplane had been the fabric and dope, at £6-15 (£6-75); the carburettor had cost ten shillings (£0-50), the rev-counter the equivalent of £1-15 and the oil-gauge a mere 20p.
The pilot friend climbed into single cockpit, opened up, and soon airborne, about ten feet up. After about 300 yards he prudently landed, but then made two more straight runs across the field before attempting circuits. Stalling speed was estimated as 33 m.p.h., and before winter called a halt about 3 1/2hr were flown, with no calamities. It is said that Tanner even survived near-vertical banked turns. As with the Blakes’ Bluetit, no Certificate of Airworthiness was even applied for - happy days!