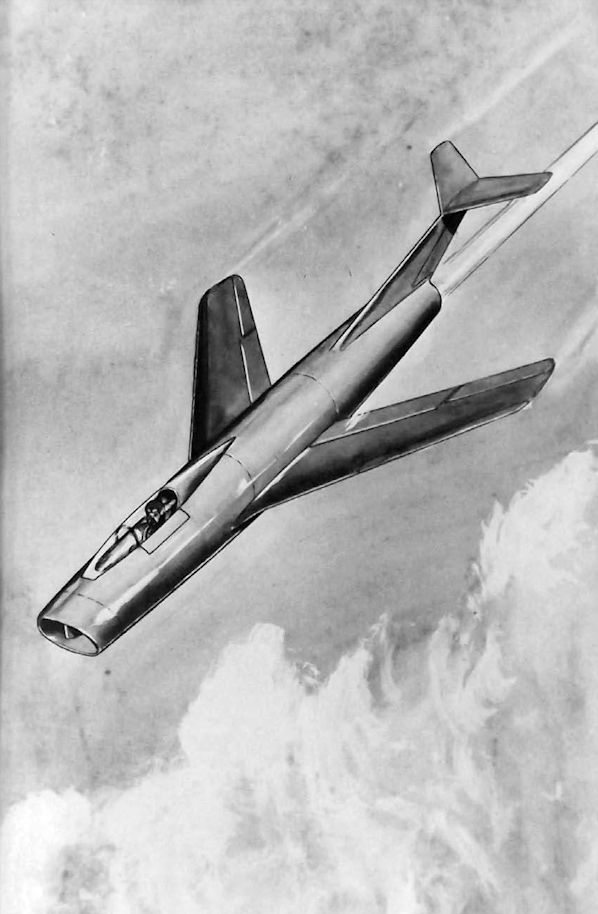 This anonymous brochure illustration depicts the original single-engined AW.58 design, in the classic diving (sometimes climbing) attitude for which AWA’s PR department clearly had a penchant.

A sketch of the delta-winged Armstrong Siddeley Sapphire-engined AW.58 design from the January 1950 AWA brochure.

An illustration of the internal details, with section drawings, of the single-engined AW.58. Within the air intake and ahead of the cockpit is a cone marked as "accommodation provided for scanner for fighter version, dielectric nose fitted to fuselage". The engine marked on this drawing is a non-reheated Rolls-Royce AJ.65 Avon.

The three-view drawing of the initial single-engined AW.58 concept from the August 1948 AWA brochure. A note applied to the head-on view explains that although it may look otherwise, there is "0° dihedral (apparent anhedral due to incidence)”; according to the side-view, wing incidence was 3°. The wheel track is 5ft 6in (1-68m).

Looking rather bloated in comparison to the original single-engined design, AWA’s Drawing No 21 shows the twin-engined AW.58 concept, with two Avons side by side, as described in an addendum in the August 1948 brochure. Again, the wing is noted as having “no dihedral; apparent anhedral is due to 3° incidence and sweepback”.