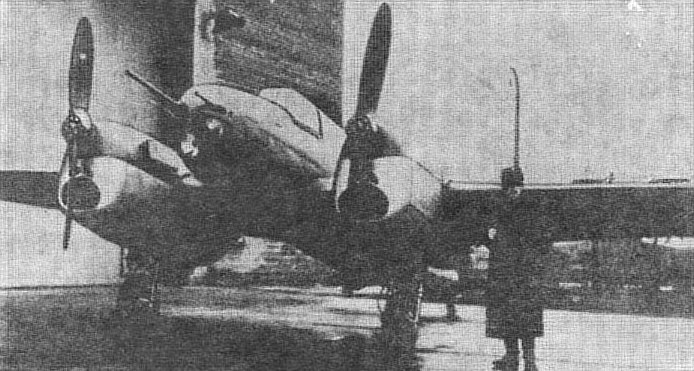 The latest twin-engined fighter exhibited is the diminutive Polish P.Z.L. Wilk, Loup, or Wolf with two secret P.Z.L.-Foka air-cooled inverted vee-eights of unspecified power. ДальшеMore>>> On first sight these might easily be taken for 240 h.p. Argus, but one is assured that the power is very much higher. The airscrews are electrically variable Ratiers. Grouped in the nose of the fuselage are a 20 mm. shell-gun, two machine guns, a landing light and the pitot head. There are two machine guns in the rear cockpit.
Unlike the little twin-engined P.Z.L. trainer the Wolf, is of all-metal construction. It has been ordered in quantities by the Polish Air Force to replace the single-engined gull-wing P.XI and P.XXIV machines. The top speed, at 285 m.p.h., is comparatively low, but development work may improve it.
Beneath the fuselage is a 660 lb. bomb which can be handled by the Wolf when functioning as a dive bomber. The twin-engined arrangement apparently obviates the use ol bomb displacement gear.
In view of the heavy wing loading the Wolf looks a bit of a handful, though its manufacturers have a reputation for building ver y sound flying machines.

This view shows the grouping of a shell gun and two machine guns in the nose of the P.Z.L. Wolf two-seater fighter. The cowling of the “hush-hush” inverted-vee engines may also be studied.

A portion of the P.Z.L. stand with the Wolf light twin-engined fighter in the foreground and the Elan twin-engined bomber. The sharp tapering of the cowlings on the Elan are noteworthy.

Powered with two Foka engines of about 450 h.p. each this neat little twin-engined fighter-dive-bomber is known as the Wilk. 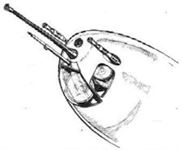 A dummy Oerlikon shell-gun and two wooden Brownings protrude from the nose of the P.Z.L. Wolf twin-engined light fighter. Note the landing lights. 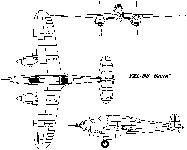