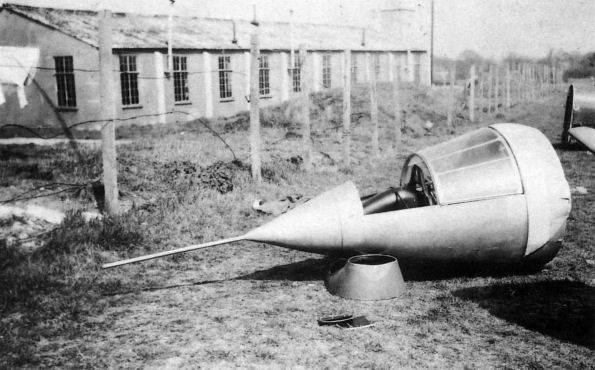 Miles M.52 (UK)
The Miles M.52 was a supersonic flight research aircraft which would have been the first manned aircraft to fly faster than the speed of sound had the project not been abandoned in 1946.

Mock-up of the Miles M.52 cockpit/escape pod dumped at Woodley. 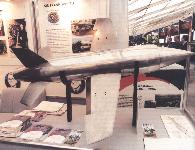 A Model of the Miles M-52 Jet-propelled Supersonic Aircraft.

The salient features of the Miles M.52 transonic research aircraft can be determined from this view of one of the makers' stainless steel scale models used for wind tunnel testing. The development of this potentially pivotal project was launched in November 1943 to Ministry of Supply Specification E.24143, the project being cancelled in February 1946. As an aircraft, the M.52 embodied a number of innovative features, along with some that were forced upon the designers by the technological limitations of the time. Among the novelties was the use of an all flying, or slab, tailplane. Another feature of interest was the unswept, thin, bi-convex airfoil wing, later to appear on Bell's XS-I, later X-l, Douglas's X-3 and Lockheed's F-104 Starfighter. Some of the impositions brought about the use of a an extremely confining cockpit-cum-escape capsule, foreshadowing that used on the Bell X-2. Besides providing the pilots with poor forward visibility, there is a very real question as to whether the capsule would have cleared the aircraft cleanly in the case of a high speed emergency. The fuselage-mounted, narrow track landing gear, necessitated by the thin wing, was another item most pilots would have preferred to do without. Power for the M.52 was to have been provided by a 2,000lb s.t. Whittle W.21700, boosted to 3,175lb s.t. with afterburning; whether this would have provided sufficient impulse to allow the aircraft to approach the critical Mach No. of 1.5 at 30,000 feet, or 1,002mph, seems doubtful, explaining why Miles were already planning a 6,500lb s.t. Rolls-Royce A.J. 65, later Avon, powered version. This raises another conundrum - did the 2.500lb overload fuel capacity of the M.52 allow a conventional take-off, climb to around 40,000 feet, a shallow reheat-power dive and retrieval to base? The one fact that does emerge is that on 9 October 1948, a joint Vickers-RAE rocket-powered 3/10th-scale fully instrumented model of the M.52 was launched from a DH Mosquito flying at 35.500 feet and achieved Mach 1.38, or 911mph in straight and level flight. This event proved that Miles had, at least, got their aerodynamics right.

A Miles Falcon-Six Monoplane fitted experimentally with the wing of the projected M-52 jet-propelled supersonic Monoplane.