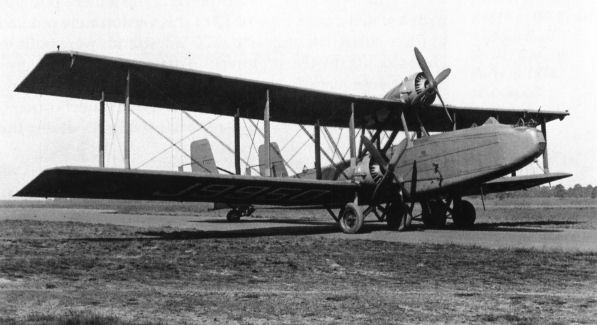 YET another aircraft which will be seen at the R.A.F. Display at Hendon on June 25 is the Boulton & Paul P.32, which is a three-engined night bomber of all-metal construction, fitted with three of the new Bristol "Pegasus" ДальшеMore>>> engines.
From the photograph it will be seen that the P.32 has a somewhat unusual engine arrangement in that the central engine is not placed in the nose of the fuselage, but on the top centre-section. Of recent years there has been noticeable a tendency to avoid the nose engine in multi-engined aircraft. There are various reasons for this, chief among them being the fact that with the central engine removed from the nose of the fuselage, the cockpits can be so arranged as to give pilot and bomber a very much better view, making the aircraft the equal, in this respect, of a twin-engined machine. There was a time when certain doubts existed concerning the soundness of placing one or more engines so high above the centre of resistance, and types produced many years ago with this engine arrangement were far from being successful. However, the latest types of aeroplanes having engines on or near the top plane of a biplane have not shown any pronounced vices, and the arrangement is now accepted as quite a permissible one, while giving a number of advantages in other respects.
The Boulton & Paul P.32 is of the type of construction which this firm has developed during a long period of years, with high-tensile steel in the primary structure.
An undercarriage of the four-wheeled type is fitted, springing being by Boulton & Paul oleo-pneumatic shock-absorbing legs. Brakes are fitted on all four wheels, and as there is a castoring tail wheel, the machine is, what with outboard engines, remarkably manoeuvrable on the ground.
Great attention has been given to the control system of the P.32, and the machine is reported to be particularly light on the controls. The ailerons have Bristol-Frise balances, while elevators and rudders are servo-operated.
That the P. 32 is a large aircraft will be seen from the following figures - the only ones which it is permissible to publish at present.
The overall length is 47 ft. 6 in. and the wing span 100 ft. The height over the central engine is 22 ft., and the total wing area 2,090 sq. ft. As the gross weight is 22,700 lb., the wing loading becomes just under 11 lb./sq. ft., and the power loading (at 3 x 555 h.p.) 13.7 lb./h.p. The particular Bristol "Pegasus" engines fitted each develops 555 b.h.p. at 4,500 ft.

The P.32 is a three-engined night bomber designed to meet the requirements of the British Air Ministry. It is in some respects a development of the "Sidestrand," but differs from it in actual dimensions, and also in that it has three instead of two engines. The placing of the third engine is unusual and has many practical advantages, such as free field of fire for the front gunner, good view for the pilot, and reduced vibration throughout the fuselage. Yet another advantage is that the placing of the third engine on the top centre section makes the installation of this engine identical with those of the two lower engines. The engines used are Bristol Pegasus moderately supercharged, rated at 555 b.h.p. at 4,500 ft. (1 372 m.).
Below we give such data of the P. 32 as it is permissible to publish :-
Length o.a. 69 ft. (21,2 m.)
Wing span 100 ft. (30,5 m.)
Wing area 2,090 sq. ft. (194 m.2)
Weight fully loaded 22,700 lb. (10 300 kg.)

THE BOULTON & PAUL P.32 NIGHT BOMBER: The Central "Pegasus" engine is mounted on the top centre section, with the result that the view for pilot and front gunner is excellent.
<<   0/0   >>