As the first aircraft to be designed and built in Canada, from home-grown timbers mostly, considerable interest attaches to the Vickers flying boat, ДальшеMore>>> designed and built by Canadian Vickers, Ltd., of Montreal. The machine was required especially for forest fire patrol and for photographic survey work, and the innumerable lakes and rivers of Canada naturally suggested the seaplane or flying boat as a suitable type. After going into the pros and cons, of the matter, it was decided to produce a flying boat, and the Vickers "Vedette," the subject of the accompanying photographs and description, was the result. Mr. W. T. Reid, at one time chief designer to the Bristol Aeroplane Co., was taken on as designer, and arrived in Canada about the middle of June. After getting together a staff in Canada, Mr. Reid set to work, assisted by Mr. Newall, late of Handley Page's, and with characteristic hustle the machine was finished and flying by November 3. Actually the machine could have been finished about a fortnight earlier, but the work was slowed down as the arrival of Flying Officer Plenderleith, who was to test the machine, was delayed.
The Vickers "Vedette" was designed for either the Rolls-Royce "Falcon" or the Wolseley "Viper," the former engine being fitted at first so as to make absolutely sure of getting the required performance, but being replaced later by the "Viper" when it was found that the latter gave well over the specified performance. Incidentally, it might be mentioned that the forest patrol and photographic survey work had previously been carried out mainly with Vickers "Vikings" or with H.S.2-L's, but that these machines were naturally rather too large when it was only desired to carry pilot and photographer. The "Vedette," in spite of her relatively low power, carries pilot and two passengers, or their equivalent weight, the total disposable load being 480 lbs. Considering that the power is but 200 h.p., the "paying load" is quite good.
The general lay-out of the Vickers "Vedette" is well shown in the accompanying general arrangement drawings and photographs. The machine is of orthodox design in every respect as regards the general disposition of its component parts, being a pusher biplane with flying boat hull. The latter is, in shape, not unlike the famous Vickers "Vikings," i.e. there is a vee bottom with two steps, but the sides are curved gradually into the cambered deck fairing. Constructionally, however, the "Vedette" differs in being planked with but a single skin, afterwards covered externally with fabric and doped.
The wing structure is of normal design, but a somewhat unusual feature, at any rate in flying boats, is that there is but a single pair of struts on each side, in spite of the fact that the span is 42 ft. The pilot's cockpit, with accommodation for two, is placed immediately forward of the leading edge of the lower plane, with a third cockpit for observer in the nose of the boat, the fairly pronounced stagger making this arrangement possible.
The Wolseley "Viper" engine is mounted on four engine struts rising from the boat hull, and is placed close under the top plane to give clearance to the pusher airscrew. Wing tip floats of usual type are mounted under the lower plane, at the points of attachment of the inter-plane struts.
As already mentioned, the "Vedette" was tested by Flying Officer Plenderleith, and a very good performance was established. With the Rolls-Royce "Falcon" engine the machine was found to have a top speed at sea level of 107 m.p.h., while with the Wolseley "Viper" the top speed at sea level was 98 m.p.h. The following performance figures all relate to the machine as fitted with the "Viper": Speed at 5,000 ft., 95 m.p.h.; at 10,000 ft., 87 m.p.h. climb to 1,000 ft. in 1-6 mins.; to 5,000 ft. in 9-5 mins. and to 10,000 ft. in 27-5 mins. The ceiling is 13,800 ft., and the landing speed about 45 m.p.h. With full load the machine gets off in 15 secs., is very dry, and lands without any "vices."
The main dimensions of the "Vedette" are: Length overall, 32 ft. 10 ins.; height, (11 ft. 9 ins.; wing span, 42 ft.; chord, 6 ft. 9 ins.; ,gap, 6 ft. 6 ins.; stagger. 19-25°; dihedral, 2°; angle of incidence, 6°. Area of main planes with ailerons, 490 sq. ft.; area of tail plane, 34 sq. ft.; area of elevator, 17 sq. ft.; area of fin, 7-5 sq. ft.; area of rudder, 13-5 sq. ft.
The weight of the machine empty, but with water, is 2.263 lbs.; petrol (55 galls.), 396 lbs.; oil (9 1/2 galls.), 64 lbs.; disposable load, including pilot, 480 lbs.; total loaded weight, 3,203 lbs.; wing loading, 6-53 lbs./sq. ft.; power loading, 16 lbs./h.p.

CANADIAN VICKERS, LTD., have, in the "Vedette Mark VI," illustrated on this page, produced yet a further development of a type which has been constructed in large numbers in a variety of new forms during the past two years. The type illustrated, which has passed Dominion Government acceptance trials without any trouble, is the first of three new versions offered, and although this particular machine has been designed mainly for photographic work, other models will be used for commercial work, forestry patrol, and training.
As a commercial machine, for general freight carrying or passenger and mail transport, it should prove entirely satisfactory, especially in such countries as Canada. It is a biplane pusher flying-boat, designed to take the Armstrong Siddeley "Lynx," the Wright J.6, the Pratt and Whitney "Wasp Jnr.," or similar powered engines.
The hull is made of Alclad with stainless steel fittings throughout, designed on the longitudinal method of construction, and divided by complete watertight bulkheads into four compartments. Wood rubbing strips, easily replaced, are fitted along the chines and keel, and a walkway is provided along the whole length of the hull top.
In the model illustrated, dual controls are fitted in a roomy enclosed cockpit immediately forward of the wings, the large windows (affording an excellent view) being arranged to fold away, so that the machine can be flown with a semi-open cockpit. The photographer is accommodated in the nose in a large open cockpit arranged with a quickly detachable wind-screen.
In the commercial model, however, the pilot is located forward, with four passengers and space for baggage behind. If preferred, the pilot can be in an open cockpit, but when enclosed, the cabin roof is arranged so that it can be collapsed very quickly for mooring purposes.
Amphibian gear and Handley Page Automatic Slots can be fitted if desired; our illustration shows a new design of quickly detachable beaching gear with "castor" tail wheel, which has proved very satisfactory in service.
Fitted with a Wright J.6-R.975 300-h.p engine, the "Vedette Mark VI" has the following weights and performance :-
All-up weight 4,500 lb.
Weight empty, but fully equipped 2,698
Useful load 1,802
Payload and pilot 1,281
Maximum speed at sea level 110 m.p.h.
Initial climb at sea level 650 f.p.m.
Service ceiling 12,000 ft.
Landing speed 54 m.p.h.
Cruising speed 95 m.p.h.
Take-off, approx. 12 seconds.
Duration 4 hours.

Another view of the Canadian Vickers "Vedette." The pilot is Flying Officer Plenderleith, of world-flight fame.

CANADIAN VICKERS "VEDETTE MARK VI": A metal-hull flying-boat, that shown being for photographic work; a commercial model for passengers and freight is also produced.

AERIAL FIRE FIGHTING IN CANADA: Our picture, which we reproduce through the courtesy of the office of the High Commissioner for Canada, shows a forest fire near Lake Winnipeg, Manitoba, with one of the suppression aircraft (a Vickers flying-boat) of the R.C.A.F. standing by.

The Canadian Vickers "Vedette" in flight. The machine can be fitted with either Rolls-Royce "Falcon" or Wolseley "Viper."

"VEDETTE" AMPHIBIANS AT OTTAWA: A group of "Vedettes" built by Canadian Vickers, Ltd., of Montreal, equipped with Armstrong-Siddeley "Lynx" engines, assembled at Ottawa preparatory to commencing operations in the Northern parts of Canada. 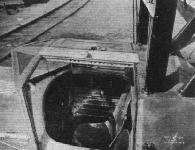 The pilot's cockpit in the "Vedette Mk. VI" (Photographic model).