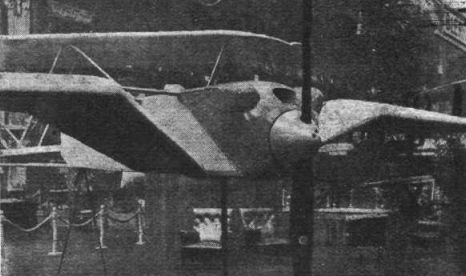 In one respect only is there any similarity between the Clement machines exhibited at this show and those of former years: metal construction has been extensively employed. This ДальшеMore>>> was ever one of the features of the Clement aeroplanes, but it cannot be said that this constructor has progressed much, considering his long experience of metal construction. One of the panels on the stand bears the legend: R. Moineau, Ingenieur. We do not know if this is our old friend of pre-War Breguet fame, but the fondness for tubular construction which is evident in the machines would almost indicate this to be so.

One of the machines exhibited is a racing monoplane with curious wings, the roots of which are placed at a very pronounced dihedral angle, running, in fact, from the bottom of the fuselage up to a level with its top in a distance of a few feet. From the points where the wing spars flatten out to a horizontal plane the wings are braced by horizontal transverse tubes running to the top of the body. No other bracing is provided, but as the wing section is very thick the metal spars are probably able to take the load with sufficient safety, especially as they are of metal construction (duralumin). With regard to this, however, it strikes one that the best possible use has not been made of the material, the spar being of an I-section built up of a vertical web and of flanges formed by angle section strips rivetted to the web. It does not appear probable that with a section like this anything like the full strength of the material can be realised.
The engine fitted is a 180 h.p. Hispano-Suiza, entirely cowled in. The radiator is placed behind the engine and is capable of being raised or lowered so as to vary the cooling.
Perhaps the most notable feature of this unusual machine is the undercarriage, which consists of two simple Vees, each carrying a disc wheel, without any shock-absorbing arrangement whatever. Each Vee is hinged at its top so as to be able to swing out laterally, but as the undercarriage was not rigged up complete one was unable to discover the exact modus operandi. When in their horizontal position the Vees and their respective wheels are housed in recesses in the lower surface of the wings. It might be imagined that the opening thus left when the undercarriage is down in its vertical position would play havoc with the fabric attachment, which, one imagines, would be very apt to be blown off. The idea seems to have something to recommend it, however, and with certain modifications might prove worth while for racing machines. At the rear the fuselage carries a tiny rudder, which is assisted by the extreme rear portion of the body itself which is hinged to move with the rudder. One has certain misgivings as to the efficacy of the little length of fairly thick fuselage stern to produce much of a turning effect. Of fins there is none.

THE LOUIS CLEMENT MACHINE: The racing monoplane with retractable under-carriage

THE L. CLEMENT MONOPLANE RACER: View from above 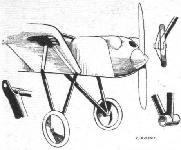 The L. Clement Monoplane has a retractable chassis which can be drawn up into the wings: Some constructional details.
<<   0/0   >>