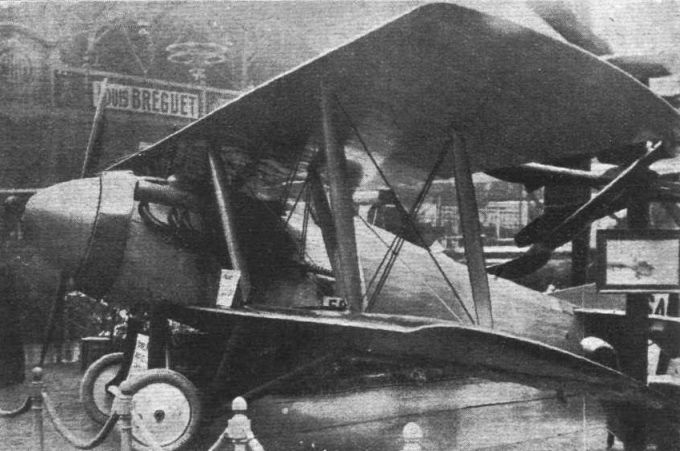 In addition to an extensive collection of airscrews, including some with variable pitch and one huge airscrew of about 40 ft. diameter, which latter has not, we are authorized to state, been ДальшеMore>>> fitted on the de Marcay ”Passe-Partout,” this well-known French constructor is exhibiting two complete machines. One of these is a standard Spad, built under licence, a machine which is so well known as to need no reference here beyond the statement of its presence on the stand.
The other machine is a war type which was to have come to the front but for the signing of the armistice. It is a single-seater fighter with 300 h.p. Hispano-Suiza engine. The fuselage is of stream line form, covered with aluminium in front and fabric in the rear. The armament consists of four machine guns, two of which are mounted above the body and synchronised in the usual way. The other two are placed in the top plane, some little distance out, and are operated by Bowden control. Whether there is actually any more certainty of hitting the target with an arrangement like this is, perhaps, open to doubt, but as a means for ensuring that, even in the case of one or more guns jamming, firing can still be maintained the idea would appear to have certain advantages.
The engine is totally enclosed in an aluminium cowl, and there is a large spinner over the propeller boss. The radiator is of unusual design, being of annular shape and totally surrounding the nose of the machine, as shown in the accompanying sketch.
The wing bracing is of unorthodox design, there being no struts connecting the top plane with the fuselage. The usual centre section struts are replaced by short lengths of lift wires, running from the body to the top of the first pair of inter-plane struts. From the lower ends of these struts, or rather from the bottom spars, two struts converge downwards and inwards, where they are attached to the lower member of the under carriage. The absence of centre-section struts and their bracing naturally leaves the pilot’s view unobstructed, but otherwise it would appear that there is no very great advantage to be derived from this arrangement.
A feature of the planes of the “Sab,” as the machine is styled, is that the top surface of both planes is covered with three-ply wood from the leading edge to the rear spar. Ailerons and elevators are balanced by having their leading edges arranged in the form of saw teeth, as shown in one of our sketches.

THE S.R.A.P. (Societe pour la Realisation d’Avions Prototypes) is a new firm with offices in Paris, which has secured the technical services of M. Bechereau, the well-known onetime designer of the Deperdussin and Spad aeroplanes.
The S.R.A.P. will exhibit a Salmson-Bechereau C.2 two-seater fighter (500 h.p. Salmson C.18), the fuselage of a Bechereau mail aeroplane, a Bechereau shock-absorbing system for Goliath aeroplanes, and a patented joy-stick.
<...>
The Salmson-Bechereau Mail Aeroplane.- The Salmson-Bechereau mail aeroplane, of which only the fuselage will be exhibited at the Salon, is a two-bay biplane of timber construction fitted with the 500 h.p. Salmson engine. The wings have a negative stagger and the bottom wing has a greater span than the top wing. The fuselage fills out the entire gap of the wings. The pilot's cockpit is situated ahead of the leading edge of the top wing. The cabin of this machine, which has not yet undergone official flying tests, is designed to accommodate seven passengers.
Specification.- Engine, 500 h.p. Salmson C.18; span, 16-90 m.; length, 10-70 m.; height, 3-60 m.; wing area, 60 sq. m.; weight empty, 1,840 kgs.; fuel load, 600 kgs.; crew (one), 80 kgs.; passengers (seven), 560 kgs.; luggage, 440 kgs.; weight loaded, 3,520 kgs.; maximum speed (designed), 190 km. p.h.; range in still air, 800 kms.


<...>
On this stand was also exhibited the fuselage of the Salmson-Bechereau mail aeroplane. Constructionally this machine, like the two-seater fighter, is of fairly orthodox construction, and neither machine calls for comment on this score. It was noticed, however, that in the case of both machines, and particularly in the case of the mail aeroplane, the rudder was of very small area.

The Pierre Levasseur S.A.B. fighter: This biplane has the top surface of its wings covered with three-ply wood 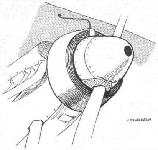 The Radiator of the Pierre Levasseur is of circular shape, and entirely surrounds the nose of the fuselage.

A French way of balancing the elevators. The tail of the P. Levasseur. On the right the inter-plane strut attachment.