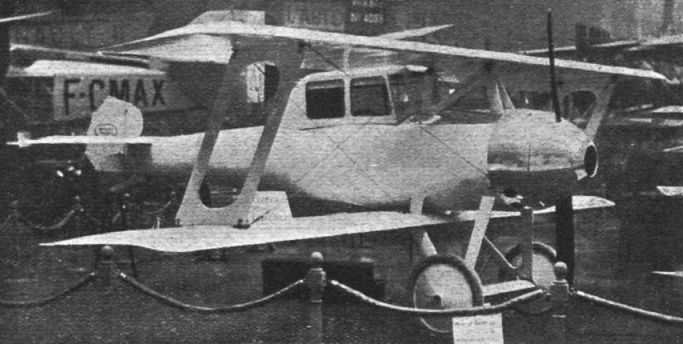 Neatness was the predominating note in the three machines exhibited by Edmond de Marcay. This was partly due to the smallness of all three machines, and partly to the monocoque fuselage ДальшеMore>>> construction. One of the machines was a two-seater, with a detachable coupe strapped on to the top of an ordinary circular section monocoque fuselage. This coupe need not be taken too seriously, as it will probably be removed when the machine is going to fly. At a show, however, it looks quite well. The two occupants are placed in tandem, the pilot in front. The cockpits are arranged as in the ordinary open fuselage machine, and the fitting or removal of the diminutive coupe does not, therefore, interfere in the slightest with the permanent seating arrangements. The fuselage is of monocoque construction and circular section. The 60 h.p. Le Rhone is mounted inside an aluminium cowl, and there is a spinner over the propeller boss.
The main planes, which are of rectangular plan form, have a pronounced stagger. The top plane, which is in one piece, is secured to the body by a small cabane. The lower plane runs underneath the fuselage, to which it is secured at three points. The front spar has two points of support in the form of two short blocks of wood. Below the plane the two rear undercarriage struts are attached to the spars at the points where occur the two wood blocks; while inside the body, so placed as to correspond to the spar blocks, is a framework which also carries the engine. In this way landing shocks are transmitted to the internal framework without imposing any stress on the monocoque shell. The rear support for the bottom plane consists of a single wood block centrally placed.
There is only one set of struts on each side, these consisting of a rhomboidal structure which does away with the use of incidence wires. The tail plane is three-ply covered, and is of the lifting type, i.e., it has a flat lower surface and a cambered top surface.
The second machine shown is very similar in general design to the one just described, the only differences being in the matter of seating arrangements and a slight decrease in overall dimensions. This machine, which also has a 60 h.p. Le Rhone engine, looks extremely neat, and should have a very good performance, since the loading/horse-power is comparatively low (9,7 lb.). It is a very pretty machine, and the price is fairly reasonable, about ?475 at the present rate of exchange.

The de Marcay two-seater, 60 h.p. Le Rhone engine: The cabin arrangement on top of the fuselage is easily detachable and was, we believe, fitted for show purposes only

The de Marcay single-seater monocoque: This was a very pretty little machine