THE announcement recently of the formation of the de Havilland Aircraft Co., Ltd., with offices and works at Stag Lane Aerodrome, Edgware, Middlesex, was received with the ДальшеMore>>> greatest satisfaction by everyone who appreciated the extensive and excellent designing work done by Capt. de Havilland during the last seven years. It was equally indicative of a famous designer's belief in aviation, and of the fact that his services were not to be lost to the country. Since that announcement first appeared, a few months ago, there has been great "busy-ness" at Stag Lane, and the first results of the activity are now beginning to take shape at the works, in the form of some new day-bombers and one commercial machine. The former, although new as regards actual construction, are really of fairly old design, the preliminary designs and estimates having been got out during the latter part of 1918.
The D.H. 14, shown in the accompanying general arrangement drawings, was designed for long-distance day-bombing, and might, had the War continued a little longer, have given the good Berliners some pretty bad "strafing." As it was, however, she was too late for this particular purpose, although the design was not cancelled. Owing to the exceptional conditions during the years following the War, and to the various readjustments of the Airco firm during recent months, the actual work of construction was much delayed, and it is not until now that the first of these machines is actually nearing completion.
Having been designed for the new Rolls-Royce "Condor" engine, the D.H.14 has also had to await the production of its power plant in a fairly final form, and with its great 600 h.p. engine it is now probably one of the highest-powered single-engined fighting machines in the world. As such it is therefore of more than usual interest, quite apart from the importance which always attaches to the work of a well-known designer.

On the original weights and power of the engine, when the design for this machine was first got out, the performance was slightly better, as the weight loaded was then only 6,930 lbs., which was estimated to give a speed at 10,000 ft. of 132 m.p.h.

THE D.H.14 DAY-BOMBER ROLLS-ROYCE "CONDOR" ENGINE: The machine paid a visit to Croydon on the day of the Air Conference.

Designed originally as the D.H.14 day bomber, the Airco D.H.14A G-EAPY was completed by the Aircraft Manufacturing Co. Ltd., Hendon, as a long range two-seat mailplane for F. S. Cotton. On February 2, 1920, Cotton left Hendon in G-EAPY for the first flight from London to Cape Town, but a forced landing in Italy ended this flight and the aircraft was shipped back to England and rebuilt. A special four-wheel undercarriage had been fitted for the Cape flight, but this was replaced by a two-wheel unit for the aeroplane’s participation in the 1920 Aerial Derby on July 24. A forced landing at Hertford wrecked the aircraft and it was written off.

The upturned DH.14A after the crash near Messina. 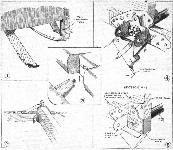 THE DE H.14 DAY-BOMBER: Some constructional details: (1) The tail skid and auxiliary skid protecting the tube of the tail plane trimming gear. (2) The eye bolt mounting of the front spar of the trimming tail plane. (3) An aileron hinge. (4) The joint between rear undercarriage strut, lower longeron, and lower rear spar. (5) Part-sectioned view of (4). The longerons are cut through and abut on an aluminium block. They are held in place by bolts through the steel plates