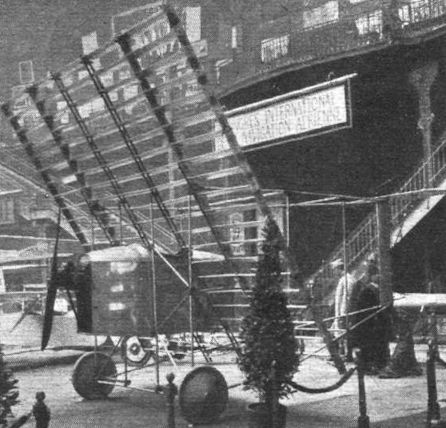 The Sanchez-Besa multiplane one might be inclined to dismiss as one of ДальшеMore>>> those freaks so dear to certain French inventors, were it not for the fact that one gathers that it has been "studied" by M. A. Toussaint, Director of the Institut Aerotechnique de Saint-Cyr. It can hardly be imagined that, with such facilities for preliminary wind tunnel tests of a scale model, the expense of a full-size machine would have been incurred unless the experiments indicated some very good reason for its construction. Looked at in this light, the Sanchez-Besa multiplane appears to demand closer study, and we consequently proceed to seek for information.
The French description of the machine, is, we believe, an "appareil de tourisme d persiennes canadiennes." The multiplane wings, which have a chord of about 6 ins. only, are arranged somewhat after the fashion of the slats of a Venetian blind, with its top leaning forward. The reasons which have led to the adoption of this design are various. To begin with, such an arrangement results in a relatively small span, while still retaining a high aspect ratio for the individual aerofoils. Secondly, the problem of metal covering is much simplified, as the narrow aerofoils lend themselves to a construction which would scarcely be possible with wings of ordinary dimensions. As shown by the accompanying sketch, the aerofoils are of composite construction, consisting of a packing or base of compressed cork, covered with aluminium sheet. The claims made for this construction are that individual aerofoils are very rigid, have a great moment of resistance, are fire proof, and are entirely free from vibration and resonance. We understand that during some inflammability tests it was found that, although the wing elements were liberally sprinkled with petrol which was set on fire, there was no indication of the aluminium melting or of the internal cork packing getting scorched. Whatever one may think of the machine as an aeroplane, it will be seen that the design has not been adopted simply for the sake of producing something unusual. It should also be pointed out that in this the first experimental machine no attempt has been made to reduce the design to the refinements of a finished product. If the multiplane arrangement proves satisfactory, its ultimate adoption to a cleaner general design will follow automatically.
The aerofoils, of which there are 21, have one single tubular Duralumin spar each, and the small twisting moment caused by the travel of the centre of pressure is lessened by so fixing the elements of each aerofoil to the vertical struts that each of the five short pieces into which each wing is divided is supported at both ends in such a way as to prevent it from twisting. Certain of the outer elements are freely pivoted on their single tubular spars so as to be free to rotate. A vertical rod running down the front of the main strut is linked to cranks projecting forward from each wing element, and is connected up to the controls in such a way as to enable the pivotted elements on one side to be tilted in one direction, while those on the opposite side are turned in the opposite direction, thus acting as ailerons.
As regards the rest of the machine, there is little to say, as this is probably a temporary arrangement only, and will not necessarily be retained in later models. The fuselage is of the short "coracle" type used in the early Caudrons. In the nose is mounted a 40 h.p. British A.B.C. two-cylinder opposed air-cooled engine, driving a tractor airscrew. The tail is carried on open tail booms in the old-fashioned way. The front portions of the four tail booms serve as supports for the wings and give rigidity to the structure. An apparently extensive amount of wire bracing is indicated by a number of lugs on various parts of the machine, but at the time of our visit to the stand, but little of the wiring was in place.
The undercarriage is of a very simple type, and provides a very wide track, owing to the placing of the wheels on the lower front corners of the tail boom structure. The weight of the machine empty is about 200 kgs. (440 lbs.). The span is 4 m. 50 (14 ft. 9 ins.) and the wing area 12-5 sq. m. (134-5 sq. ft.). No particulars relating to performance are available, but it is understood that after the closing of the Salon the machine will be put through its tests, when we hope to be able to inform our readers of the results. 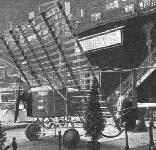 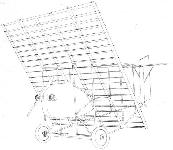 The Sanchez-Besa Multiplane: Designed in the form of a Venetian blind, the wing elements of this machine are of Duralumin sheet, with a filling of compressed cork.

The undercarriage of the Sanchez-Besa multiplane is built up entirely of metal tubing.