The De Havilland Glider "Sibylla" ready for a flight. 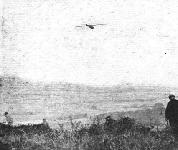 Capt. Broad on the De Havilland Glider No.4 making a flight from Beddingham Hill. 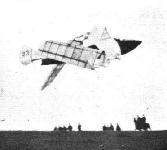 "The wings became self-warping, and I held the camera to my eye, waiting, waiting... until at last they gave up the ghost."

THE DE HAVILLAND GLIDER: Photograph taken from below of a scale model of the machine. 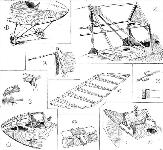 SOME CONSTRUCTIONAL DETAILS OF THE DE HAVILLAND GLIDER: 1. Front portion of the fuselage and the Vee undercarriage. 2. The bulkheads or formers to the apices of which the wing is attached. 3. Details of the top of the rear bulkhead, showing attachment of the wire which forms the ridge of the triangular top of the fuselage. 4 shows construction of superstructure over pilot's cockpit, and 5 some of the smaller details. In 6 is shown one complete elevator flap, with trailing edge cut through to show laminated construction. The leather elevator hinges are indicated in 7, and in 8 is seen the U-bolts and compression struts of the internal wing bracing. 9 shows the bulkhead on which the front edge of the tail plane is mounted.