The Morane-Saulnier Cabin Machine: Known as the type A.V., this cantilever monoplane is fitted with a detachable engine unit, in which all engine controls and engine instruments form part of, and are removed with, the unit. In the background may be seen such a unit, mounted on a sectioned portion of a fuselage. 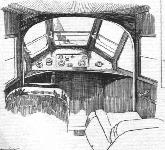 THE MORANE-SAULNIER CABIN MONOPLANE: A view inside the cabin, showing pilot's seat, instrument-board, etc. The square panel in the centre of the instrument-board contains all the engine instruments, and is removed with the engine unit, of which it forms a permanent part.

THE MORANE-SAULNIER CABIN MONOPLANE: One of the four bolt attachments which secure the engine unit to the fuselage, while in the bottom corner is shown, diagrammatically, the quick-detachable engine unit, with engine instruments, throttle controls, etc.