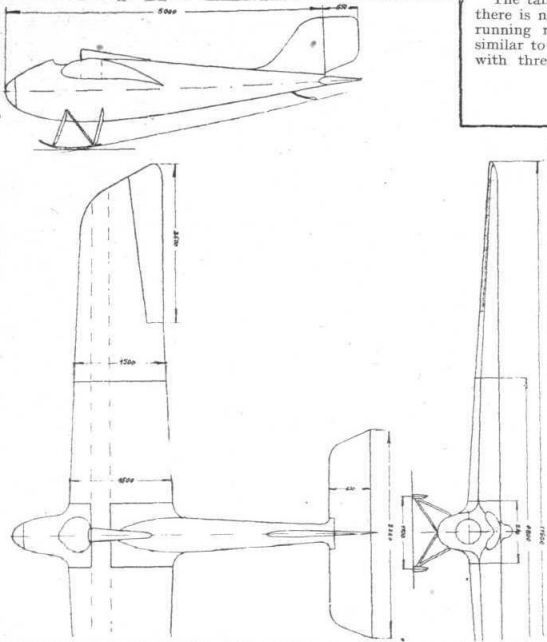 THE Flugtechnische Verein of Stuttgart has been interested in gliding for several years, and at least two complete types have been produced by its students. The second of these, known as the 1922 type, ДальшеMore>>> was entered for last year's Rhon competition, but with the spectacular performances of the Hannover machine the flights of the Stuttgart scarcely received the attention it merits. By the courtesy of Flugsport we are able to publish this week a brief description of this machine, based upon an article in our German contemporary by Herr P. Brenner, to whom also the drawings and sketches are due.
The Stuttgart 1922 type is a cantilever monoplane, in which simplicity of construction has been combined with good aerodynamic properties. The general arrangement drawings, it should be pointed out, somewhat flatter the actual machine, inasmuch as they show a monocoque fuselage, whereas, in point of fact, the outer form is polygonal. Nevertheless, the machine is of very pleasing appearance, and shows a rather greater length between trailing edge and tail planes than do the majority of German gliders. That this fact has been instrumental in a considerable degree in making the machine answer her controls better is scarcely to be doubted.
Aerodynamically, the cantilever monoplane wing is characterised by a very pronounced taper in thickness and a somewhat more gradual diminution in chord from root to tip. In order to facilitate transport, the wing is built in three sections, of which the centre portion has a span of 4-8 m. (15 ft. 9 ins.). The chord near the fuselage is 1-6 m. (5 ft. 3 ins.) and at the joint 1-5 m. (4 ft. 11 ins.). The wing section is Gottingen No. 441.
Constructionally, the wing is interesting, chiefly on account of the fact that a single spar is used This is in the form of a box, of approximately square section in the centre, tapering off to a rectangular section at the tips. This form of construction must have simplified the wing construction very considerably, as the box spar is not tapered in plan, and consequently the ribs could be cut out, leaving an opening in them of constant width, varying in depth only, according to the depth of the rib itself. The box spar is covered with three-ply, and it is stated that under the most unfavourable conditions (during a steep dive) the factor of safety has been found to be 5. It is thought that, actually, it is greater, owing to the fact that the front portion of the wing is covered with thin three-ply, which may be regarded as a D-section tube and which would considerably strengthen the wing, although it was not taken into account when calculating the factor of safety.
The two end pieces are attached to the centre-section by simple metal straps, and the centre-section itself is of somewhat unusual arrangement, in that only the box spar runs across the fuselage, the leading and trailing edges being cut away, and their place taken by a permanently built-up structure which forms part of the fuselage. The accompanying sketch will make clear the arrangement. The manner of attaching the wing to the fuselage is extremely interesting, and it would be difficult to imagine a simpler attachment. Four flat steel straps pass over the wing, and are secured by four buckles of the type used for fastening down magnetos.
It will be seen that if the wing is a reasonably good fit in the root on the fuselage, the straps need only hold down the wing, which is located laterally and fore-and-aft by the shape of the cut-out portions and their counterparts on the body.
The fuselage construction is indicated in a sketch. It was desired to make the work of building it as simple as possible, and consequently, monocoque construction was discarded in favour of a simpler method. The main framework consists of four longerons, to which are attached rectangular panels with elliptical holes cut in them. It is argued that, although this form does not give as great rigidity as would one in which triangular pieces had been cut out, leaving diagonal strips running from corner to corner, it has the advantage of giving considerable flexibility, which, it is thought, virtually makes the fuselage stronger against shocks. This is, of course, due to the fact that the panels are braced by the roughly triangular pieces left in the corners. The final shape is attained by tacking stringers to the edges of the oval formers, and covering the whole with fabric.
The tail plane is pivoted, or, looked upon in another way, there is no tail plane, but merely a large balanced elevator running right across. It is of a construction somewhat similar to that of the wing, and its front portion is covered with three-ply, the rear portion with fabric. The fin is built as an integral part of the fuselage, and the rudder, as well as the ailerons, is of aluminium, covered with fabric.
The undercarriage is of the twin-skid type, braced laterally and fore-and-aft by diagonal struts.
The pilot sits in front of the wing, and a fairing, which is also intended to protect him in case the machine turns over, is fitted behind his head. The controls are of usual type.
In spite of the fact that the machine was so designed that it could be built by amateurs out of standard materials, the weight has not worked out unduly heavy, the machine weighing 176 lbs. empty. The span is 11-6 m. (38 ft.), and the wing area is approximately 180 sq. ft. Assuming a weight of 150 lbs. for the pilot, the wing loading becomes l-8 lbs./sq. ft.

THE STUTTGART MONOPLANE GLIDER: Above, sketch of fuselage construction; below, a perspective sketch showing manner in which wing is located on fuselage.
<<   0/0   >>