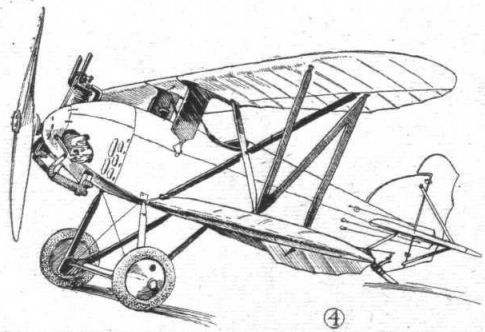 <...>
As far as actual machines are concerned, Sweden's contribution to the Show was completed by a small side-by-side school biplane exhibited on a separate stand. ДальшеMore>>> This machine was stepmotherly treated in the matter of attendance, as we could never find anyone in charge of the stand, and no information was available beyond a brief announcement tacked to the fuselage, which stated that the machine was built by Nordiska Phoenix of Gothenburg. The engine fitted was a Bristol "Lucifer" of 100 h.p.
The Nordiska Phoenix biplane is of the single-strut type, with folding wings, but the wing bracing is unusual, in that but two diagonal tubular bracing struts are used on each side, the anti-lift struts running through, while the lift struts are divided where they cross the others. The lift struts are attached at their inner ends at the point of attachment of the front spar to the body, and at their outer and upper ends to the rear spars, where the inter-plane struts meet these. The arrangement should be clear from the accompanying sketches. Precisely what the designers had in mind in designing this form of bracing is not clear, and it would appear that the wings would not be very good in resisting torsion. The aileron cables are not interfered with when the wings are folded, as they emerge from the wing and run into the fuselage at the rear spar, where the hinge is situated. The petrol tank is mounted in the top centre section, with a feed pipe running down from each side, along the centre-section struts.

AT GOTHENBURG: Some of the Swedish machines: The Nordiska Phoenix school biplane, with Bristol "Lucifer" engine.

AT GOTHENBURG: Some Swedish constructional details. The folding hinge and aileron cables on the Nordiska Phoenix.
<<   0/0   >>