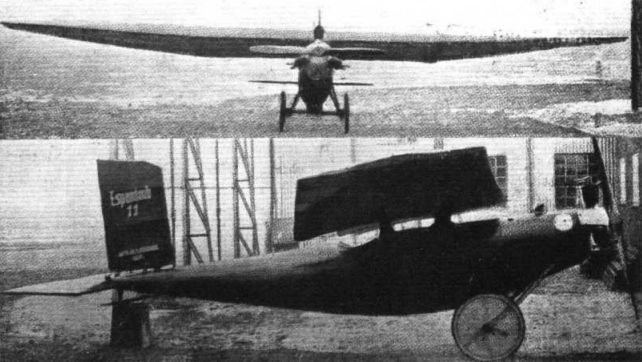 For some peculiar reason, detail information concerning the little machine exhibited by Herr Espenlaub was difficult to come by. The machine is a parasol monoplane of all-wood construction, ДальшеMore>>> including the wing covering, designed to carry pilot and passenger. The wing, which is in one piece, is mounted on four ply-wood covered cantilever struts rising from the fuselage, and is attached thereto by four quick-release catches. For transport the wing is, presumably, detached and placed lengthwise, still resting on the four struts. The engine fitted is a 40 h.p. six-cylinder Anzani radial air-cooled. One of our photographs on the next page shows the general lines of the machine.

The Espenlaub monoplane has its parasol wing supported on four cantilever struts. The engine is a 40 h.p. 6-cyl. Anzani.

Glider and Light 'Plane at Rossitten: The upper monoplane is the "Dessauer," piloted by Fuchs, during a duration flight of eight hours. Below it is seen the Espenlaub light monoplane.
<<   0/0   >>