THE VERVILLE "AIR COACH": Side view of this American commercial monoplane, fitted with a 110 h.p. Warner engine. 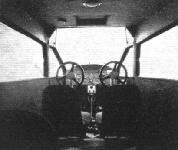