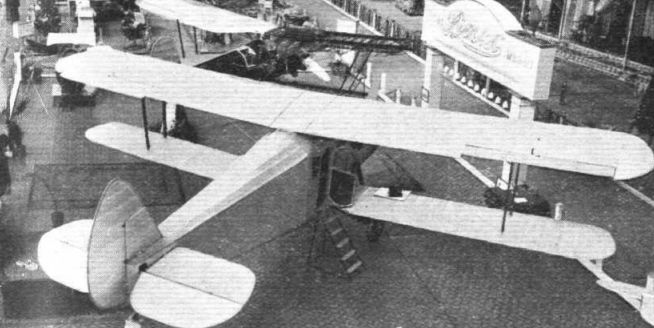 Two complete aeroplanes will be exhibited on the stand of the Bristol Aeroplane Co., Ltd., one a single-engined four-seater passenger machine with Bristol "Neptune" engine, ДальшеMore>>> and the other a "Bulldog" single-seater fighter with Bristol "Jupiter."

The Bristol Stands: On the aircraft stand in the foreground may be seen the 110A passenger machine, and behind that the "Bulldog" single-seater fighter. In the background the engine stand. 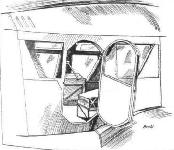 A view through the door in the cabin of the Bristol 110A. The front seats fold up into a small space,

FUSELAGE DETAILS OF THE BRISTOL TYPE 110A PASSENGER AIRCRAFT: On the left a joint in the front portion, where solid steel tubes are used. In the centre portion "crinkled" strip tubes are used, while in the rear portion strip construction, with a minimum of riveting, is adopted.

Rib and aileron construction, in steel, on the Bristol 110A passenger machine.

The bearings of the "Frise" ailerons are supported, in the 110A, on specially reinforced extensions of the main ribs.