Side and three-quarter rear views of the D.W.2. 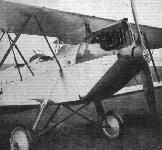 Forward portion of the D.W.2, showing engine and undercarriage

The Tail Surfaces of the D.W.2 are of generous proportions.

The wing construction of the D.W.2 is very simple. Note that the spar depth is smaller than the overall rib depth.

THE D.W.2: On the left, a general sketch showing wing construction. On the right, one of the interplane strut fittings on the main spars.

The fuselage of the D.W.2 has plywood covering on sides and bottom, and a fabric-covered fairing on top,

On the left is shown the fitting on the fuselage which takes the telescopic leg of the undercarriage and the forward centre-section strut. On the right are shown the two types of spar end fittings used.