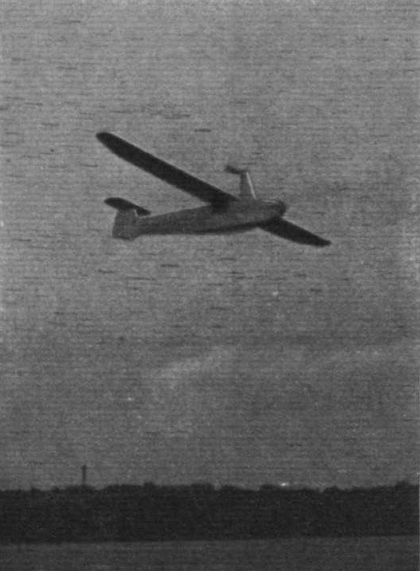 PROBABLY man has dreamed of being able to fly by his own efforts ever since he first became aware of birds in the sky above him. Technicians are divided on the subject, some holding that man is unable to fly by his own power, ДальшеMore>>> others that in a very efficient and lightly constructed machine he should be able to do so, at least for a short time.
Some years ago a prize of 5,000 marks was offered in Germany for the first man to make a circular flight around two points 500 metres apart, using only his own power to propel him through the air. The conditions of the competition permitted some form of energy storage to be used, but stipulated that it should be carried during the flight. For example, a compressed-air container might be used to drive the airscrew, but the pilot himself, without outside aid, would have to pump up the container before the start of the flight.
Two young German engineers, Haessler and Villinger, attacked the problem in a different way, and used a rubber cable as the "accumulator." Their machine is very like an ordinary glider in outward appearance, but inside the nose of the fuselage is placed a large spool on which a rubber cable is wound, this cable, on being stretched around the spool, supplying power to an airscrew placed above the wing of the glider.
The machine, which has a wing span of 44 ft., is extremely light, weighing but 77 lb. without the rubber cord "accumulator," and 110 lb. with it.
A German pilot, Herr Dunnebeil, after thorough physical training, succeeded some time ago in making several flights in the machine, some of them of more than 200 yards in length and up to 22 seconds' duration.
Although he failed to win the prize of 5,000 marks, Dunnebeil was awarded a consolation prize of 3,000 marks, while the two constructors had placed at their disposal a sum of 3,000 marks for further development work.

The one-man-power aeroplane in flight.

The nose of the Muskelkraftflugzeug, showing the rubber-cord "energy accumulator" drum.
<<   0/0   >>