The fuselage of the author’s Flea, with metal fittings, emerges from the window of the spare bedroom of his house on the Isle of Wight, ready for final assembly. 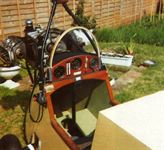 The business end of the author’s Flea, taken when the Volkswagen engine was fitted. The Douglas later installed greatly improved the “authentic” appearance of the aircraft.

The fuselage in the back garden, complete with engine, seat, windscreen and undercarriage. Its simple, box-like structure with single-plane curvatures is evident.

Left, a side view of the engine installation, showing the steel-tube mounting which also supports the front wing. The air-cooled Douglas flat twin was bought by the author’s brother as the result of a chance meeting at an autojumble, and replaced the converted VW 1600 originally installed. Note the throttle and mixture levers at the cockpit edge.
Right, a three-quarter front view of the Douglas engine, showing the propeller handcrafted by the author. It bears the legend “Shore Craft” on its blades. 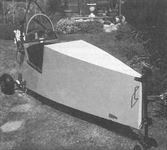 A rear view of the completed fuselage.

Left, the rear fuselage inspection panel and the stainless steel shim on the tailwheel leg.
Right, a detail shot showing the bolted construction of the wing pylon.

A close-up of the instrument panel, showing, left to right, the airspeed indicator, climb and dive indicator, rev counter, fuel gauge and altimeter. The compass is below in the centre. The Douglas engine is installed. 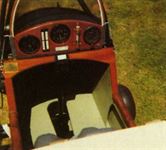 Looking into the cockpit, which is “surprisingly roomy”, though there is barely space to get one’s knees under the instrument panel.

Left, diagrams for construction of the rudder in Mignet’s book. This was the first component built by the author.
Right, how not to build a propeller: Mignet suggested carving it from a solid piece of timber. 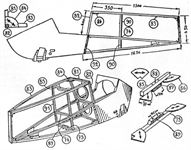 Henri Mignet’s elementary “building by numbers” instructions for assembling the Flea fuselage, as published in his book The Flying Flea, first released in France in 1933 as Le Sport de l’Air.