A still from TV video footage showing a UkAA Mi-24 wearing a United Nations logo left over from its previous work operating peacekeeping missions in Africa. The logo violated UN rules referring to the use of its symbol and was later removed.

An Mi-24R assigned to the 7th Independent Regiment (Army Aviation) pictured during the battle for Donetsk Airport on May 26, 2014.

A 7th Independent Regiment (Army Aviation) Mi-24VP, serial ‘10’, releases flares during the battle for Donetsk Airport on May 26, 2014. This was one of three Hinds that sustained heavy damage during the offensive against Slavyansk on June 3-4.

Mi-24P Hind-F (serial ‘15’) armed with two Shturm-V anti-tank missiles is pictured at a forward operating site at the start of the battle for Slavyansk. It made an emergency landing on June 4, 2014 after sustaining combat damage.

Two Mi-8MTs in eastern Ukraine in May 2014, when all UkAA helicopters still operated without exhaust duct mixers for anti-missile protection but were armed with 80mm rocket packs. 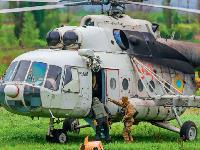 The white-painted Mi-8MT delivering an assault party in the Slavyansk area.

This National Guard of Ukraine Mi-8MTV-1, equipped with a forward-looking infrared system in the nose turret, is used for medical evacuation. It was recalled from its lease to commercial operator Ukrainskiye Vertolety.

An Mi-8MT operating in eastern Ukraine at the beginning of the conflict. The helicopter still has the white colour scheme it wore for supporting UN operations in Africa.

A UkAA Mi-8MT pictured at a forward operating site between sorties. This Hip-H is armed with two 20-round rocket packs, but lacks EVU engine exhaust mixers.

A UkAA Mi-8MT damaged by small arms during operations over separatist checkpoints near Slavyansk on May 2, 2014. The helicopter made an emergency landing and was sent for repair.

Эвакуация подбитого Ми-8
An Mi-8MT being taken for repair following an emergency landing on May 2, 2014 after it sustained damage from small arms fire near Slavyansk.