The Voltigeur’s initial chief contender was the three-seat SIPA 1100, fitted with a retractable tailwheel undercarriage and powered by a pair of 600 h.p. Pratt & Whitney R-1340 Wasp radial piston engines. The initial order for ten examples was cancelled after the prototype had flown.
SIPA 1100. The Sipa 1100 has been designed as a general-purpose aircraft and will be used for reconnaissance, observation, photography and fire-patrol duties. The wing area is huge as is the vertical stabiliser. A well-glazed cockpit encloses a crew of three. Armament is mixed and will consist of two 20-mm. cannon, rocket pods, napalm tanks, light machine-gun pods and SS-11 guided missiles.

The first prototype SE.116 Voltigeur, with Wright Cyclone radial engines, displays its warload beside the SNCASE hangar at Marignane in Marseille. France’s misdaventures in Indochina - Dien Bien Phu fell in the spring of 1954 - had revealed a need for a modern, effective tactical strike aircraft.

A comparatively rare photograph of the second Voltigeur, bearing the last letter of its civil registration, F-ZWVI, on its aft fuselage, and fitted with Bastan turboprops. Its career was short: it made its maiden flight on December 15, 1958, but crashed as a result of extreme flutter a mere 25 days later, killing all three crew aboard.

The incorporation of a deeper and wider rear fuselage robbed the SE.117 of the previous prototypes’ more elegant profile, but it could carry a crew of eight in greater comfort.

The third and final Voltigeur prototype, F-ZWVX, incorporated sufficient design changes to merit a new designation, SE.117, although the prototype sequence was maintained as No 03. Despite the changes, the type still experienced control problems during its test programme and was ultimately used mainly as a Bastan testbed.

With the final letter of its civil registration for testing - F-ZWVH - visible aft of the fuselage roundel, the first SE.116 prototype poses for the camera during its flight-test programme in the second half of 1958. Essentially intended as an update of the Douglas A-26 Invader the Armee de I’Air had fielded in Indochina, production Voltigeurs were to be turboprop-powered.

The Wright Cyclone-powered prototype, SE.116-01, lands after a successful test flight in 1958. Design problems with the flap arrangement led to a significant nose-down pitching moment when the flaps were extended, making anything but a three-point landing virtually impossible. 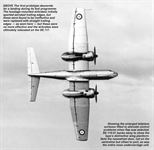 Showing the enlarged tailplane surfaces fitted to alleviate control problems when flap was selected, SE.116-01 banks away to show the type’s distinctive wing planform. Note the nosewheel door, not on the centreline but offset to port, as was the entire nose undercarriage unit.

The first Voltigeur prototype made its maiden flight on June 5, 1958, in the hands of experienced test pilot Roger Carpentier, officially the first French pilot to have gone supersonic, in a Dassault Mystere II, on December 12, 1952. He also set a new altitude record of 24,300m (79,700ft) in the rocket-powered Trident II in early May 1958.

The wooden mock-up of the initial SE.116 design, with the rear-facing ventral position aft of the trailing edge, which was ultimately deleted from the finalised design. The contours of the engine nacelle suggest that Turbomeca Astazou turboprop engines were also considered as an alternative to the originally intended Bastans.

SNCASE/SUD SE.116/117 VOLTIGEUR. IN TOTAL THREE prototypes of the Voltigeur were built, the first being powered by a pair of Wright Cyclone radial piston engines and the second and third by Turbomeca Bastan turboprops. Although broadly similar to the SE.116, the third prototype differed in important aspects, and was accordingly given the new designation SE.117.

Working to the same requirement as SNCASE with the Voltigeur, Dassault adapted its eight-passenger MD.415 Communaute transport into the MD.410 Spirale for the close-support, operational reconnaissance, liaison and transport roles. The main modification was the military-configured fuselage, with a fully glazed nose section.