The "Bristol" Blenheim, now standard equipment in the R.A.F. A super high-speed all-metal bomber monoplane, fitted with “Bristol” Mercury engines.
The fine lines of the 280 m.p.h. Bristol Blenheims of No. 114 (B) Squadron are well brought out in this view.
Bristol’s Blenheim medium bomber was developed from the company’s civil Type 142 high-speed transport and entered RAF service in March 1937. It was fast and comparatively cheap - the man-hours required to build a single Short Stirling could produce more than three Blenheims.

THE HANDLEY-PAGE "HAMPDEN": two “Bristol” Pegasus XX engines, with C.P. airscrews. A mid-wing monoplane day and night bomber-fighter of all-metal construction with flush riveting and stressed skin; fitted with the H.P. flapped-and-slotted wing system, giving a wide speed range. Retractable undercarriages and tail-wheel. The crew of four are accommodated in enclosed cockpits giving three gun positions. No details of performance may be given, but manoeuvrability, speed and capacity are notable characteristics. Built by Handley-Page Ltd.
The single-pilot Handley Page Hampden was dubbed “the flying suitcase” by The Aeroplane’s Editor, C.G. Grey owing to its extremely slim fuselage. Interestingly, a German intelligence assessment of the time rated the Hampden as the RAF’s best bomber. 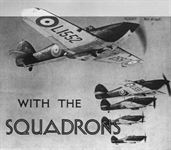 Hawker Hurricane eight-gun fighters of No. 111 (F.) Squadron. This unusual picture of a Hawker Hurricane formation reveals details of this formidable eight-gun fighter and gives an idea of the precision with which it can be flown in formation.
The Hawker Hurricane entered RAF service in December 1937 with No 111 Sqn, four Hurricane Is of which are seen here in the tight “finger four” formation the RAF favoured at the time. The Hurricane marked the end of the twin-gun biplane RAF fighter era, the type becoming the Service’s first eight-gun monoplane fighter. It would prove invaluable in the Battle of Britain during the summer of 1940.

This line up of 19 Squadron Supermarine Spitfire Mk Is was taken at RAF Duxford in May 1939. The squadron became the first to receive Spitfires, in August 1938, and its Mk Is remained in service until replaced by Mk IIAs in September 1940. Note the wooden two-bladed fixed-pitch propellers; variable-pitch props were reserved for bomber types, fixed-pitch props being deemed adequate for bomber-interceptors.

Designed to Specification P.27/32 for a single-engined day bomber, the Fairey Battle entered RAF service in May 1937. Originally conceived as a bomber able to reach Paris, it was hopelessly ill-equipped to be able to shift its focus to targets in Germany; as a strategic bomber it was an abject failure - but it had potential as a short-range tactical bomber.

The Westland Lysander was designed to Specification A.39/34 for a two-seat Army co-operation aircraft, the prototype making its first flight in June 1936. The “Lizzie” entered RAF service in May 1938 and served throughout the war in an impressive variety of roles including reconnaissance, air-sea rescue and spy-dropping.

The Hawker Henley, built to Specification P.4/34 for a high-speed monoplane light day bomber, was closely related structurally to its stablemate the Hurricane, and was essentially designed to bomb Paris. It was only ever used as a target-tug, however.

Air Ministry Specification F.11/37, issued in May 1937, called for a twin-engined two-seat fighter fitted with four 20mm cannon in a power-operated turret. A contract was placed with Boulton Paul for the P.92, a half-scale model of which was built by Heston Aircraft as the P.92/2, serial V3142, seen here. The dome atop the fuselage represented the outline of the wide-diameter low-profile turret. 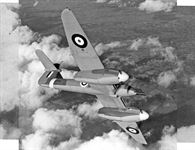 Истребитель Уэстленд "Уирлуинд" в полете
Designed to Air Ministry Specification F.37/35, the Westland Whirlwind was the first single-seat twin-engined fighter to see RAF service, the first production examples being delivered to No 263 Sqn at Exeter in December 1940. The type’s four fixed forward-firing 20mm cannon in the nose offered an excellent concentration of considerable firepower, although it never quite overcame early teething troubles and was later used in the fighter-bomber role.

The Short Stirling, designed to Specification B.12/36, was the first four-engined monoplane bomber to enter RAF service, and the first to be used operationally in wartime. It was considered such an outstanding design that it was proposed in 1940 to send one to the USA to give American designers an idea of what could be achieved.

The Vickers Wellington entered RAF service in October 1938 and, although designed as a day bomber, formed the backbone of RAF Bomber Command’s night raids during the early days of the war.

"Манчестер" I с трехкилевым оперением из 83-й эскадрильи, 1941 г.
The twin-engined Avro Manchester was designed to fulfil Specification P.13/36 for a medium bomber “for worldwide use”. The prototype made its maiden flight on July 25, 1939, and the type entered RAF service in November 1940; its Rolls-Royce Vulture engines were troublesome, however, and it was withdrawn in June 1942.

Dorniers show a model of the Do-19 heavy bomber which has four Bramo engines. The prototype has been flying for about three months.
One of the largest German landplanes was the Dornier Do 19 bomber with four Bramo radials. It will be seen that the machine resembled a scaled-up Whitley.
Bearing something of a resemblance to the Stirling, the German Dornier Do 19 “Ural Bomber” was exactly the sort of four-engined long-range strategic bomber British planners were expecting in droves over the UK should war break out. The Germans felt it was more important to focus on tactical fighters and bombers, and cancelled the Do 19 in April 1937.