Close up view of the hoist system on the MH-65. The hoist is capable of lifting approximately 600 lb; its assembly is attached to a movable boom.

Although not over water aircrew typically train throughout the Los Angeles area for VFR flight conditions here flying past the famous Hollywood sign.

A rescue swimmer is lowered via the hoist and a sling strap device to the water. The red rescue target, commonly called the sponge bob by crews that simulates a swimmer in distress, can be seen in the water. Crews practice different types of insertions (sling, basket, freefall) to the water to rescue Bob during a training flight.

An aircrewman prepares to lower a basket to a training vessel as the pilot in the right seat carefully manoeuvres the helicopter over the boat.

One of the air station's MH- 65s in the hangar during a major inspection with the radome open showing the antenna of the enhanced radar.

Side view shot from a second MH-65 as Dash 1 lowers a basket down to the lifeguard vessel. 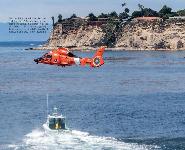 With the Palos Verde Peninsula in the backdrop the LA County lifeguard inspects the basket in preparation for the helicopter to hoist it back up, typically the air station works with lifeguard boats at least once a week in the local area.

The MH-65D is powered by two Turbomeca Arriel 2C2-CG Turboshafts. The US Coast Guard recently reached a milestone with the Arriel engine surpassing one million flight hours in the MH-65.

MH-65D 6570 flies over the famous Queen Mary liner as part of a routine patrol over the Port of Long Beach.

MH-65D on final approach to the Air Station at Los Angeles International. The distinct LAX control tower and rotating restaurant are in the background. The common sight of MH-65s at U\X finished in May when 52 years of Coast Guard flight operations at LAX ended with the closure of the Air Station.

Equipment typically or can be carried on the MH-65 including basic EMT and hypothermia kits.

Rescue litters can be used to hoist a patient that needs to stay in a lie-flat position.

Shot of the cockpit of helicopter 6508, showing some of the new digital GPS and inertial navigation systems next to the original dials still used in the aircraft.

F-16s painted with the red and black tail bands of 140 Squadron are a familiar sight in Australia's Exercise Pitch Black.

F-16s painted with the red and black tail bands of 140 Squadron are a familiar sight in Australia's Exercise Pitch Black.

The DASH-3 Helmet Mounted Sight seen on a pilot’s helmet during Exercise Cope Tiger in Thailand.

No.410 Tactical Fighter Squadron ‘Cougars’ based at 4 Wing Cold Lake is currently operating CF-18AM 188761 in a full-colour paint scheme to commemorate the the British Commonwealth Air Training Plan in operation between 1940 and 1945. The aircraft is the 2016 Royal Canadian Air Force CF-18 demo aircraft.

Seconds before getting back on board the hoisted firefighter is grabbed by the other firefighter waiting on the foot platform.

The S-70 demonstrating its capability of dipping the 3.6m snorkel into a nearby water source...

As the Firehawk departs the area in the back­ground the Bell 412 comes in for a landing on a small dirt landing area in the Angeles National Forest above Los Angeles.

View of the inside of the maintenance Air Operations facility at Barton Heliport as the S-70 is towed out to the ramp after completing an inspection.

The Firehawk provides a stable hover platform as a firefighter is hoisted down to the hillside below. Hoisting is crucial to be able to pick up patients in areas where the helicopter may not be able to land.

Some of the avionics panels removed from the Firehawk’s water tank for inspection. The white panel is the computer flow control system box that allows the pilots to control from the cockpit the doors on the Aero Union tank to vary the amount of water or flame retardant dropped during a drop.

The SX-16 Nightsun, here seen on the Firehawk, is carried by all Air Operations helicopters.

Close up view of one of the General Electric T700-GE-701C engines on the S-70, the durably and reliability of the engine enables the Firehawk to carry heavy loads in harsh conditions.

A maintainer closely inspects the Firehawk tail rotor system prior to an early morning flight.

Interior front view of the cabin on the Firehawk. Note the EMS oxygen panels on both sides of the cabin, and medical suction, along with onboard power for hook up of various medical equipment which allow for transport of multiple patients, also of note are the seats that are folded up to the roof of the cabin that will be used to carry a Fly Away firefighting team.

The Royal Canadian Air Force commander is very happy with the decision to purchase the C-17 Globemaster III, which gives the service an invaluable capability to carry heavy loads over long distances.

Malaysia Airlines says it will only operate its six A380s for another two years. Here 9M-MNE (msn 94) is pictured at Paris CDG, of the destinations the carrier has axed - London Heathrow is now its only European destination.

A340-500 9H-TQM (msn 117) taking off from Paris Charles de Gaulle International Airport. Aerospace company Swiss Space Systems, S3, has contracted Hi Fly to operate ZeroG flights in 2016 and 2017. This commercial operation of ZeroG flights under the status of an airline company is a world premiere.

Hi Fly is trying to specialise so that the Maltese Air Operator Certificate (AOC) is used for the A340 and the Portugese AOC on the A330.

MESA engineers work on a CFM56 engine fitted to an A340.

The CH-124 Sea King will be retired from service in December 2018 after more than 50 years of service with the Royal Canadian Air Force.

A330-300 CS-TMT (msn 96) in the colours of Saudi low-cost carrier Flynas landing at Manchester. CS-TMT was leased from Hi Fly between May and November 2014.

Hi Fly is trying to specialise so that the Maltese Air Operator Certificate (AOC) is used for the A340 and the Portugese AOC on the A330.

Following its service with Flynas during the summer of 2014, A330-300 CS-TMT (msn 96) was subsequently wet leased to Saudi Arabian Airlines in late 2014 and served with the carrier for much of 2015. The aircraft is seen at Tel-Aviv International Airport in May 2015. 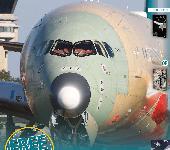 A GI EC145 in the hangar at Cazaux. The GI has at least one of each type operated by the FAGN. 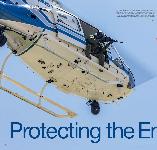 As part of airborne use of force training, shooters are required to fire six shots while hovering at various distances from a fixed target.

View of the Inland Empire as N30NT, one of the unit’s H125B2s, lifts off from a hillside landing area. Note the unit's second helicopter in the background.

Shortly after take off from Cable, the unit received a call for a vehicle fire in a nearby park­ing lot. Because of the helicopter’s speed the aircrew were first on scene, even before the fire department, and helped the operation by using the FLIR system to guide the firefighters safely to the vehicle. 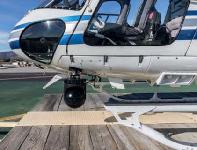 The Ontario Air Support Unit team after completing a day’s airborne use of force training; the newest asset to the unit, N10NT, serves as the backdrop

The newest helicopter in the Ontario Police Department Air Support Unit fleet, H125B3e N10NT, banks aggressively over the shooting range during the unit's airborne use of force training exercise.

A GI AS350 awaiting its crew before a night mission.

Due to the small cabin size, the flight engineer’s seat in the AS350 is turned around so that he has enough room to assist intervention team personnel during fast roping.

Personnel from the intervention team fast rope from the AS350.

Inside the ASU hangar at Cable Airport. The unit is staffed by two full-time mechanics.

H125B2 lines up alongside the second ship for a photograph as both return back to Cable Airport.

A distinguishing feature on all of the Ontario Police Department’s Air Support Unit helicopters is a motif of the American Flag painted on the tail.

Close up of the Spectrolab Nightsun SX-16 illumination system.

Interior view of one of the unit’s H125B2s. Of note is the large Airborne Display monitor used to display the AeroComputers' digital mapping system.

A rare view from inside the cabin showing what the shooter sees when manoeuvring over the target. The goal is to hit the target (seen at the left of the door) on the white tarp in between the cars.

An EC135 moves forward while a student flight engineer tries to balance a heavy bag, simulating the weight of a person on the winch.

One of the GI instructors explains how to install and operate the fast-roping system to students before the start of an exercise.

An EC135 lands in a field inside the Cazaux Air Base training area, which is ideal for practising winch­ing and fast roping techniques. 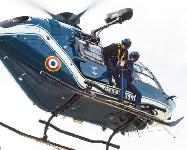 The student flight engineer checks is everything is OK before he allows the member of the intervention team to fast rope down.

Winching exercise with the EC 135 of the GI.

A student flight engineer winches up one of the GI's instructors while a second instructor evaluates the manoeuvre from the helicopter.

A student flight engineer lowers the winch before the start of an exercise.

Gulfstream's G650ER measures 99ft 9in nose to tail and 99ft 7in from wingtip to wingtip.

The Gulfstream G650ER set two new world records during a round-the-world flight from New York to Savannagh, via Beijing.
The contours of the wing and winglets of the G650ER are clearly shown in this head-on shot. The aircraft has a high cruise speed of Mach 0.90.

The cabin on board this G650ER features leather reclining seats throughout and a sofa fitted on the forward left-hand side.

The G650ER's flight deck is set out in a straightforward but ergonomic way.

A screen grab of display showing the view of the approach lights seen through a cloud deck as presented to the pilot by the EVS II.

An RQ-21A Blackjack is recovered with the flight recovery apparatus cable aboard USS Mesa Verde (LPD 19) after its first flight at sea on February 10, 2013.

A test team member checks the consistency of fuel before adding it to an RQ-21A aboard the amphibious transport dock ship USS Mesa Verde (LPD 19).

Test team members move an RQ-21A on to the Mk4 launcher aboard USS Mesa Verde (LPD 19).

Members of the Small Tactical Unmanned Air System test team wheel an RQ-21A across the flight deck of the amphibious transport dock USS Mesa Verde (LPD 19) after its first flight at sea in the Gulf of Mexico on February 10, 2013.

An RQ-21A Blackjack on the Mk4 launcher immediately prior to launch from the flight deck of the USS Mesa Verde (LPD 19) for its first flight at sea.

An RQ-21A launches off the rail aboard the USS Mesa Verde (LPD 19) for the type's second successful launch Off a Ship.

An RQ-21A is successfully captured by the recovery system aboard USS Mesa Verde (LPD 19).

Upgrading the CH-146 under a programme dubbed the Griffon Limited Life Extension is available to address obsolescence issues, and if implemented would allow the type to continue operating well into the 2030s.

As the Firehawk departs the area in the back­ground the Bell 412 comes in for a landing on a small dirt landing area in the Angeles National Forest above Los Angeles.

A Bell 412 seconds before touchdown. Note the pilot's ability to land on a very remote and rugged patch of land, a vital skillset for all of the Departments pilots to be able to conduct, given the unit's mission of conducting medical evacuations of patients from areas difficult to access.

Copter 11, one of the Bell 412s undergoing a periodic inspection.