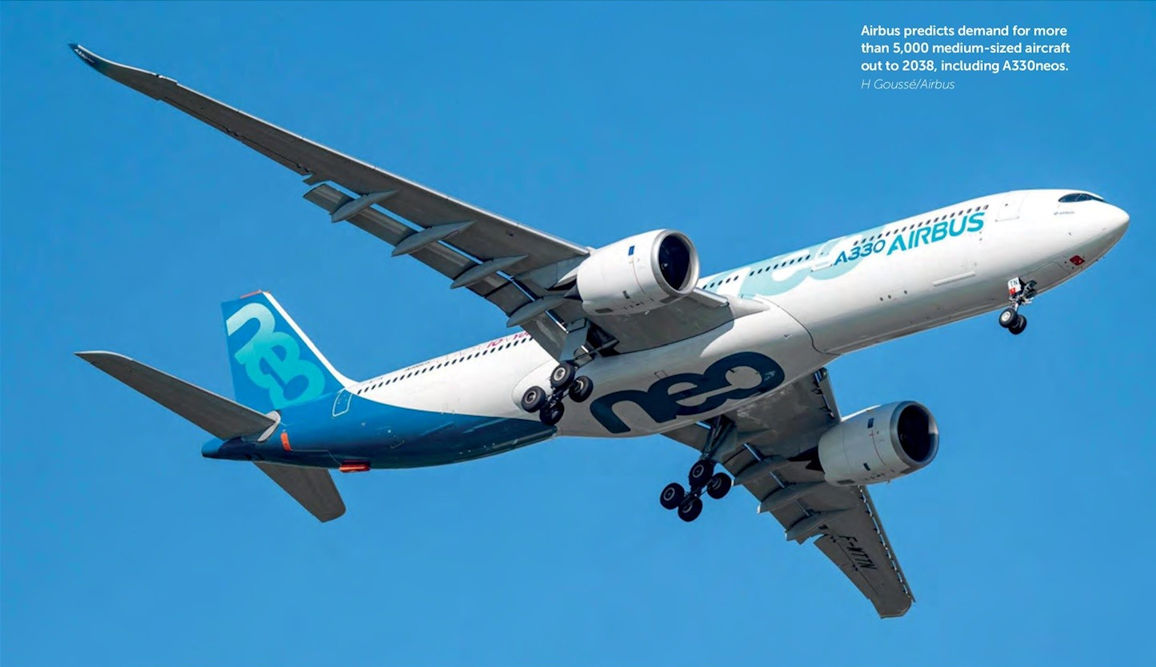 Airbus predicts demand for more than 5,000 medium-sized aircraft out ot 2038, including A330neos.

This aircraft, F-WTTN (msn 1795), pictured here during its first flight, is one of two A330-900neos that will be used during a 1,100-flying hour certification testing campaign for the variant.

Rolls-Royce Trent 7000 engines with their 112-inch (2.8m) fan diameter and Sharklet wingtip devices make the A330neo stand out from older A330 variants.

The first A330-900neo rolled out late in December. Note the Sharklet wingtip devices and the ‘shades’ cockpit design, two of the main visual differences from older A330s.

The first A330-900, seen here in the Toulouse paint shop, is due to fly in the first half of this year.

The A330-800 flight test aircraft F-WTTO (msn 1888) photographed during its maiden flight on November 6, 2018. This aircraft is now undergoing 300 hours of testing to certify the variant. 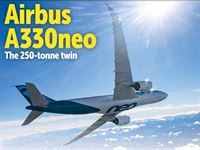 A higher-performance A330-900 began test flying in March 2020.
Airbus announced receipt of EASA certification for the 251-tonne MTOW on October 8, 2020. This was the first flight of the revised aircraft, on February 28, 2020

Delivery of the A330-900neo to launch operator TAP Portugal is due during the fourth quarter.

The Airbus A330-900 is now cleared for operations beyond 180 minutes' flying time from the nearest diversion airport, with airlines able to opt for up to 235 minutes, if desired.

Thai AirAsiaX results from a joint venture between the Malaysian carrier and Asia Aviation; AirAsia has ordered 78 Airbus A330-900s, with two in service by the end of October 2020

Garuda Indonesia has 12 Airbus A330-900s on order, with three delivered

This Airbus A330-800,9K-APF (c/n 1964) - seen departing Toulouse, France for the Middle East - was one of two delivered to Kuwait Airways on October 29, 2020. The airline is the first to place the shorter A330neo variant into revenue service

Engine delivery delays held up the A330neo’s delivery to TAP, which was due to put the aircraft into service in December 2018.

TAP Air Portugal has most of its 100-strong fleet in storage while it operates just 25 flights a week during the COVID-19 crisis.

Air Senegal is the latest iteration of the country's flag carrier following the collapse of its predecessors.

Airbus has rolled out the first A330-900neo for another operator, WOW Air, but a declining overall backlog for the aircraft means the company is to lower output of its best-selling widebody.

Assembly work on the initial Airbus A330-800neo is underway in Toulouse ahead of its planned mid-2018 first flight.

The fuselage section for the first Airbus A330-800neo under assembly in Hamburg. Final assembly of the aircraft is due to start by the end of the year.

The first demonstrator engine of the Trent 7000, the seventh member of the Trent family, recently had its first run. The engine will power the A330neo.

The version of Airbus' Airspace cabin concept for the A330neo includes adjustable LED lighting and a customisable entrance area.

LED mood lighting will feature in the A330neo cabin.

The economy class cabin of Hi Fly’s A330neo, soon to be in service with SpiceJet

The Incremental Development programme has laid the foundations for the A330neo variants, the first of which is due to fly this year.

TAP Portugal has been confirmed as the launch operator of the A330-900neo, which is due to fly early next year. The airline will also be the launch customer for the newly unveiled Airspace cabin.

AirAsia will put the A330-900neo in service later next year, having recently bought another 34 examples to join the 66 it previously ordered. The airline’s first example of the re-engined widebody will be delivered next year.

Virgin Atlantic's order for A330neos was announced on the opening day.

Airbus has launched the ACJ330neo, a private jet version of the A330neo, with the capability to fly 25 passengers 9,400nm (17,400km) and accommodate conference!dining areas, a private office, bedroom, bathroom and guest seating.