THE PARNALL PARASOL MONOPLANE
This "Flying Laboratory" has been designed for making full-scale tests of wings. The parasol wing is so attached to the fuselage that it is free to move slightly, and a dynamometer is incorporated by means of which the forces ДальшеMore>>> on the wing can be ascertained.

THE PARNALL PARASOL MONOPLANE: The wing is raised well clear of the fuselage to avoid interference.

Side View of the Parnall Parasol Monoplane. The wing bracing struts are in the form of a deformable parallelogram. 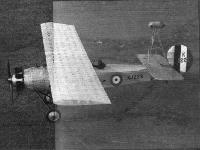 Studying air flow: The Parnall parasol monoplane used at the Royal Aircraft Establishment for filming, by an automatic camera, the movements of wool tufts on the wing. The actual air forces on the wing are also measured.