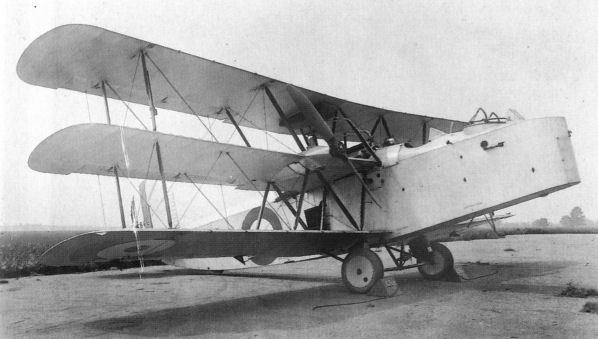 ALREADY during the War the Germans experimented with aeroplanes having a central engine housing with transmission to propellers on the wings. In one instance, the Linke-Hoffmann, the engines drove a large-diameter air-screw placed, as in single-engined machines, in the nose of the fuselage. In France the Breguet firm has produced the Breguet-Bugatti engine unit, in which two engines drive a common propeller-shaft with a single air-screw in the nose of the fuselage.
In this country we were somewhat late in starting experiments with central engine housings, but work has been going on for more than a year now on various machines in which the central placing of the engine is the main feature. The difficulties are very considerable, not only because the central placing of all the heavy weights results in greater wing stresses, but also, and more particularly, because the design of a sufficiently rigid transmission offers very serious problems.
The Parnall "Puffin," designed by Mr. Bolas and constructed by George Parnall and Co. of Bristol, is essentially an experiment intended to test the merits of central engine unit with transmission gears to propellers on the wings. Ultimately, of course, the goal is the production of large machines with two or more engines in the fuselage, driving two or four propellers on the wings, but at present the constructors of the "Puffin" have confined themselves to the use of one engine, a Napier "Lion," so as to experiment with various forms of transmission, and at the same time obtain an idea of to how great extent it is possible for the engineer to look after his engine, even to the extent of effecting minor adjustments or repairs during flight. Many of the experiments carried out up to the present have indicated that the transmission is likely to be unduly heavy, but there is reason to believe that as more experience is gained it will be possible to bring down the weight to a reasonable figure. In the case of the Parnall "Possum" we understand that the central placing of the engine and the outboard position of the propellers, with transmission gearing, etc., has increased the weight by something like 1 lb. per horsepower, but it may be possible ultimately to reduce this weight somewhat, and experience may show that the advantages attained outweigh the increase in structure weight.
In the Parnall "Possum" the triplane form of wing structure was chosen so as to enable the shafts of the transmission to be housed inside the middle wing. The form of wing bracing adopted makes the mounting for the gear-boxes very rigid, and no undue vibration is, we learn, experienced when the engine is running. Universal joints are incorporated so as to allow of a certain amount of relative movement without throwing undue stress on to the shafts,
Accommodation is provided for a crew of three. The pilot's cockpit is a short distance ahead of the air-screws, and he consequently obtains an excellent view forward and downward, with the added advantage that there is no slipstream to cause swirls in and around his cockpit. In front of the pilot is placed a compartment for a wireless operator, navigator or gunner, whichever is carried, and a set of dual controls is installed so as to allow either pilot or gunner to take control of the machine on a long flight or in emergency.
The engine, as already stated, is housed inside the fuselage, in line with the wings, and behind it is a compartment for the engineer. The latter is provided with a starting handle by means of which he can start the engine without leaving his cockpit, so that the machine can get away from an aerodrome or field without assistance from anyone outside the crew. Radiators are fitted on the sides of the fuselage, and are so mounted that the cooling can be varied by swinging back the radiators, maximum cooling being obtained when they are at right angles to the fuselage and minimum cooling when they lie against the sides of it.
The undercarriage is of the combined oleo and compression rubber type, and special attention has been paid to handling and steering the machine on the ground. For this purpose the usual tail skid has been replaced by a steerable tail wheel of novel design. The tail wheel is fitted with brakes in such a way that the weight on the wheel actuates the brakes. Thus the braking force is always proportional to the load on the wheel, and it is claimed that when properly adjusted no skidding of the wheel can take place. The brakes are connected up to a lever in the pilot's cockpit so as to enable him to release the brakes for taking off and taxying. This tail wheel has already proved to be of very great advantage when handling the machine on the ground. Not only is the use of a special tail trolley avoided, but even at walking pace the machine can be steered almost as easily as a motor-car.
Both the engine and transmission have been severely tested on the test bench and in position on the machine, the whole unit having been run for nine hours in the machine on the ground at 90 per cent, of full power.
Following are the main particulars of the Parnall "Possum": Length o.a., 39 ft.; span, 46 ft.; chord, 6 ft.; gap, 4 ft. 6 ins.; wing area, 777 sq. ft.; incidence, 3 degrees; dihedral, 2 1/2 degrees; propellers, spaced 14 ft. 6 ins. apart; diameter, 9 ft. 6 ins.; propeller, r.p.m., 1,180; weight of machine loaded, 6,300 lbs.; wing loading, 8-1 lbs./sq. ft.; power loading (on 450 h.p.), 14 lbs./h.p. As the machine has been built for the Air Ministry no performance figures may be published.

THE PARNALL "POSSUM": This machine is of special interest not only on account of being a triplane, but because its Napier "Lion" engine is housed withip the fuselage, and drives the airscrews on the wings through gear transmission.

AT THE R.A.F. PAGEANT: One of the larger machines which took part in the "Fly Past": The Parnall "Possum" triplane (Napier "Lion"), with gear transmission