OF the two complete aircraft to be exhibited on this stand, one will be the little "Peto" two-seater designed for service with submarines, while the other will be the new "Elf," a private owner's two-seater machine rather beyond the light 'plane class, fitted with the A.D.C. "Hermes" engine.
<...>
The Parnall "Peto" is a two-seater reconnaissance biplane designed for service use in conjunction with submarines. It is of composite construction, the metal work being chiefly stainless steel or duralumin. The limitations on space for stowage on board a submarine called for considerable ingenuity in design to meet service requirements and at the same time produce an aircraft that was seaworthy and had a useful air performance. The "Peto" can be launched from or stowed in its base in an exceedingly short time. Provision is made for catapult starting.
The fuselage is of rectangular form, with spruce longerons and spruce or stainless steel struts. The rounded deck fairing meets the underside of the centre-section. The fuselage is fabric covered except the sides of the front cockpit, where quickly-detachable aluminium panels are used.
The biplane wings have spars and ribs of spruce, while the centre section and aileron spars are steel tubes. The top planes have ailerons extending the whole span, while the lower plane trailing edge is hinged for wing-folding purposes.
A braced monoplane type of tail is used, of composite construction and fabric covered. The fin is underslung, the rear spar to which the rudder is hinged being attached to the top and bottom longerons. The tail plane has provision for trimming during flight.
Of the twin-float type, the undercarriage has streamline struts of N-formation in side elevation, braced with cables in front and rear panels. Long single-step duralumin floats are carried cantilever fashion on front and rear booms, and can be readily removed without interfering with the bracing.
The engine is an Armstrong-Siddeley "Mongoose," supported on a simple girder-type plate attached to the fuselage by steel tubes. A hand-starting gear is fitted in the passenger's cockpit. The engine cowling is quickly detachable, and a 14-5-gallon petrol gravity tank is fitted inside the fuselage, the 1 1/2-gallon oil tank being placed immediately below it.
Tandem cockpit arrangement is provided, both cockpits being aft of the top centre-section. They are fitted with seat pans capable of taking parachutes or air cushions. The observer is provided with a chart case, observation instruments and a short-wave wireless transmitting and receiving set. The pilot's cockpit contains the standard joystick controls and service equipment.
Following are the main dimensions of the Parnall "Peto": Length, 22 ft. 6 1/4 in.; span top plane, 28 ft. 5 in.; span bottom plane, 20 ft. 5 in.; width, folded, 8 ft.; height, 8 ft. 11 in.; track over float centres, 6 ft. 1/2 in.
The tare weight is 1,300 lbs. and the loaded weight, 1,950 lbs., giving a wing loading of 11-4 lbs./sq. ft. and a power loading of 12 -65 lbs./h.p.
The performance of the "Peto" is: Full speed at sea level 113 m.p.h.; at 5,000 ft., 107 m.p.h. Rate of climb at sea level, 600 ft./min. Climb to 5,000 ft. in 11 mins. Endurance 2 hours.

LITTLE BUT GOOD: This is not a new light 'plane but the Parnall "Peto", with Bristol "Lucifer" engine. Alternatively, an Armstrong-Siddeley "Mongoose" may be fitted. Officially described as a float-type reconnaissance machine, the "Peto" is intended to operate from a somewhat unusual "base." Note the strut-bracing of the folding wings, and the "tunnel cowling" of the "Lucifer" cylinders.

A bow view which shows how small the seaplane is and the small target offered by a submarine when head-on. The Peto is here in position on the catapult rails and is all ready for launching. The rails being fairly high hold the aircraft clear of all obstructions and it is not therefore, necessary to dismantle any of the handrails and stanchions.

LETTING HER GO: Looking down on the Peto just as the catapult was fired.

THE ILL-FATED SUBMARINE AIRCRAFT CARRIER M.2: In " Flight " for July 31, 1931, we published an account of a trip to sea in this strange form of aircraft carrier. On Tuesday, January 26, she was last seen by the Captain of a coastal steamer, who reported that she sank stern first. Up to Wednesday evening no official news had been received which gave any hope that the crew would be saved, but it was rumoured that an obstruction had been found during sweeping operations. Whether or not this was the vessel was still uncertain, and grave fears were held for the lives of the crew.

UP INTO ACTION: The sequence of operations is shown here. First the submarine comes to the surface, and when the bow is clear of the water the hangar door is opened. Next the aircraft is run out and placed on the catapult, where the wings are unfolded, finally, after the engine has been run up, the catapult is fired and the aircraft flies off on a reconnaissance flight.

DOWN TO SAFETY: After having carried out the reconnaissance flight the little seaplane alights near the submarine where the derrick is already trained over the ship's side. The aircraft then taxis up and is hooked on, lifted up and swung on board and placed on the catapult rails. After the wings are folded it is pushed back into the hangar, which is closed, and once more the submarine dives out of sight. 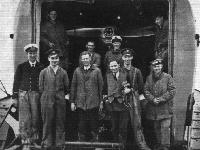 On the Parnall Stand: In the foreground the "Peto" seaplane designed to work with submarines. Behind it the "Elf" two-seater civilian machine.

Side elevation of "Peto" with wings folded.