NEW ARMSTRONG-WHITWORTH "ARGOSIES" FOR IMPERIAL AIRWAYS: An improved type of this well-known machine is to be put on the British air routes during the coming season. Among the improvements is the substitution of geared "Jaguar" engines. Of the above photographs, 1, 2 and 3 show a lower wing, to which is attached the servo control for the ailerons. This consists of a small rudder, the angle of which can be varied by the pilot. 4 is a view of the cabin in course of construction while 5 is an internal view, looking forward. The "nose" of the fuselage is shown in 6. The tubular framework will support a quickly detachable engine mounting, fireproof bulkhead, etc.

DETAILS OF THE NEW "ARGOSIES": The landing gear unit is shown in 1, and the mounting for one of the wing engines in 2. One of the large petrol tanks is shown in 3 (inverted). The capacity is 180 gallons.

LITTLE BUT GOOD: This is not a new light 'plane but the Parnall "Peto", with Bristol "Lucifer" engine. Alternatively, an Armstrong-Siddeley "Mongoose" may be fitted. Officially described as a float-type reconnaissance machine, the "Peto" is intended to operate from a somewhat unusual "base." Note the strut-bracing of the folding wings, and the "tunnel cowling" of the "Lucifer" cylinders.

FLIGHT TESTING NEW LIGHT 'PLANE ENGINE: These two photographs show the Westland "Widgeon" monoplane fitted with the A.B.C. "Hornet" engine. Note the neat cowling, which is completed by a spinner not shown in the photographs.

WESTERN CANADA AIRWAYS: Some of the machines employed by W.C.A.: The summer base at Opawika Lake, with a Fokker "Universal" fitted with floats.

WESTERN CANADA AIRWAYS: Some of the machines employed by W.C.A.: Fokker "Universals," fitted with skis, on the frozen surface of Cold Lake.

A "NOSE-BAG HANGAR": Our sketch shows an ingenious arrangement whereby Western Canada Airways can carry out minor repairs and adjustments to the engine in comparative comfort during winter conditions. Orthodox hangars are few and far between, but these small huts can be put up almost anywhere.

WHITHER AWAY? Photograph of the Napier-engined Fairey long-distance monoplane on a test flight. This machine is to be sent on a flight to beat the existing world's record. No destination has yet been given. 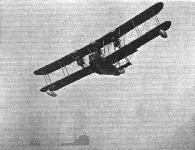 APPRECIATION: The Blackburn "Iris" flying-boat with Rolls Royce "Condor" engines. Arrangements have recently been completed for building the "Iris" in the United States. It is also believed that this machine is the type referred to by Sir Samuel Hoare in connection with a new flying-boat squadron.

AVRO "AVIANS" AT HOME AND ABROAD: (1) The Lancashire Aero Club's new Avro "Avian" flying over Woodford Aerodrome during the acceptance test by Mr. Hall, Chief Instructor. Note the new type undercarriage. (2) Mr. R. S. Adair (left), a pilot of Aircrafts Proprietary, Ltd., with the official of General Motors Acceptance Corporation, at the conclusion of their 1,500 miles tour of Queensland, Australia, in an Avro "Avian." (3) A very good close-up of a stalled landing on the "Avian" fitted with Handley Page slots. (4) Miss Lya de Putti, the Hungarian film star, nestling to her own "Avian" at the Grand Central Air Terminal, New York. She is now in England and is sending to America for her machine.

THE NEW DE HAVILLAND "HAWK MOTH": These photographs were secured recently while the machine was on a test flight. The "Hawk Moth," which is fitted with a De Havilland "Ghost" engine, was described and illustrated in "Flight" of February 7, 1929.

WESTERN CANADA AIRWAYS: Some of the machines employed by W.C.A.: A Boeing flying-boat, based on Vancouver.

Cowling a four-cylinder, in-line engine. The "Cirrus III" in the Blackburn "Bluebird" is almost totally enclosed, and its drag must be very low. Standing by the machine is Maj. Bumpus, Blackburn's chief engineer.

THE BLACKBURN ALL-METAL "BLUEBIRD": This machine, Blackburn "Bluebird IV" (85-h.p. "Cirrus III"), has now been completed and is here seen in flight. The aerial view was secured from a Blackburn "Kangaroo."

CLEAN LINES: In spite of its side-by-side seating arrangement, the Blackburn "Bluebird" with "Cirrus III" engine has very pleasing lines and is probably very efficient aerodynamically. The pilot on this occasion was Capt. Blake, Blackburn's Chief Test Pilot.

AILES A FENTE: A Latecoere, Type Lat. 25, has recently been fitted with Handley Page Automatic Wing Tip Slots. The cabin of this all-metal machine is very comfortably appointed. 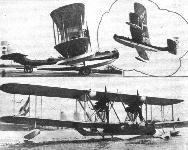 "SOUTHAMPTONS" FOR THE ARGENTINE: Acceptance tests have just been carried out with the first Lorraine-engined Supermarine flying-boats ordered for the Argentine Naval Air Service, Commander Zar and Lieut. Portillo observing the tests officially.

For the Australian Flight: Our picture shows Flt.-Lieut. Moir and Pilot-Officer Owen inspecting the Armstrong-Siddeley Geared "Jaguar" engine which will be fitted to the Vickers "Vellore" machine on which they hope shortly to fly to Australia.

TOWARDS AUSTRALIA: The Vickers "Vellore," with Armstrong-Siddeley geared "Jaguar" engine, on which Moir and Owen are making a fast flight to Australia. 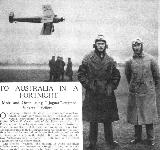 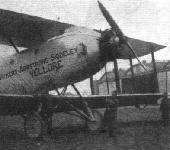 NOT A CONJUROR: The man in this photograph is not balancing the Vickers "Vellore" on a stick, but is starting the "Jaguar" by means of a long detachable cranking handle.

THE BURNELLI MONOPLANE: Three-quarter front view, and (above) the machine in flight with the landing wheels retracted. It is fitted with two 625-700 h.p. Curtiss "Conqueror" engines. 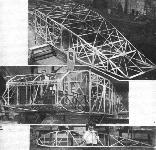 Figs. 1 and 2 are skeleton views of the fuselage, which is constructed of extruded dural, heat treated, drawn to various sections - angles, tees and channels - built up into a truss framework which is covered with corrugated dural. Fig. 2 clearly shows one of the two tubular steel engine mounts. These are pivoted in the front "corners" of the fuselage and are not only detachable but can swivel outwards, thus facilitating engine replacement and adjustment. In addition, the engines (two 500-h.p. Curtiss "Conquerors") are "getatable" from inside the fuselage. The dual controls are also shown in this view.
Fig. 3 is one of five "former-ribs" used on each wing panel, also made of extruded dural, which support the lateral stringers to which the corrugated sheet dural is fastened. There are no other ribs, as in orthodox wing construction, the shape of the wing being maintained by these former-ribs and stringers built up around the main spars. Drag trusses are used at intervals.

Fig. 5 is a view looking forward inside the cabin, which can accommodate 20 passengers. At the head of the cabin are the two windows immediately behind the pilots' seats, and on the pillar in the centre are mounted altitude and speed indicators lor use of the passengers. The large lounge in the centre is arranged on top of a 400-gallon petrol tank (there are also petrol tanks in the wings).

Figs. 5 and 6 are two more interior views, looking aft, on the port and starboard sides respectively, showing, behind the main cabin, the compartments arranged for toilet, kitchen, and wireless. The woodwork of the cabin is walnut and the rinish is in grey. 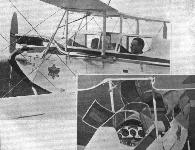 Mr. John Scott-Taggart (left) welcomed by Capt. Strub, Provincial President of the Swiss Aero Club, on his arrival at Lausanne from Stag Lane in his Gipsy-Moth. This was his first cross-country solo-flight.