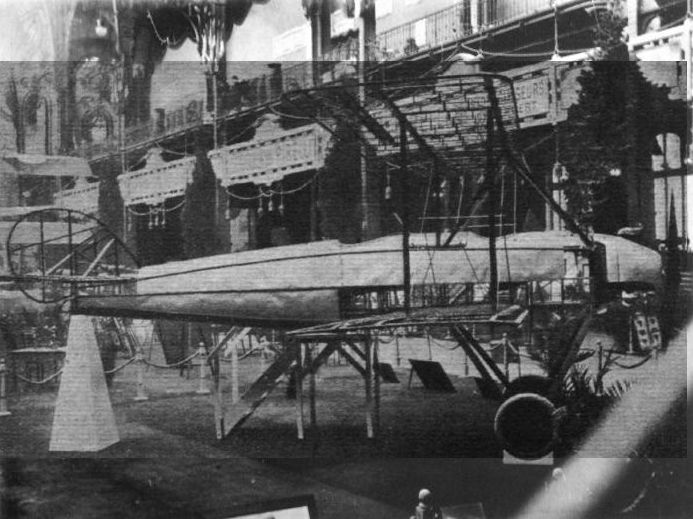 Probably the centre of attraction of v this stand will be formed by the new Boulton and Paul all-metal machine, the P 10, with 100 h.p. ДальшеMore>>> "Lucifer" Cosmos engine. This machine is of very original design as regards its construction. The body is built-up of formers and longerons of rolled steel sections, as shown in the accompanying photograph. Between the formers and longitudinals are interposed panels of special fibre sheet, which is riveted to the metal parts. Extensive experiments in the rolling of sheet steel strips into suitable sections have enabled Messrs. Boulton and Paul to provide forms of metal construction which have excellent strength/weight ratios and which approach very close to the ideal rolled metal section - i.e., a section in which the full strength of the material can be developed.
It is not only as regards the fuselage construction that P 10 is built of metal. The wings also are constructed entirely of steel, apart from the fabric covering, of course. The spars are of rolled-steel sections, the results of a number of experiments extending over a considerable period. Dr. Thurston, in his paper read before the Royal Aeronautical Society, mentioned and illustrated one of the Boulton and Paul spar sections, of which these new spars are a development.
The ribs also are made of steel, each part being specially designed to fulfil its own particular function. The mounting of the 100 h.p. Cosmos "Lucifer" engine on the P 10 is of special interest. It is so arranged that by removing the vertical hinge-pin on one side the whole engine and its mounting may be swung about the opposite vertical hinge, thus allowing easy access to the back of the engine for inspection and adjustments. The piping, controls, etc., are so arranged that they do not require disconnecting when the engine is swung out.
This feature of the design is one of the greatest importance from a practical point of view, and one to which other designers would do well to pay attention.

As already mentioned, the Boulton and Paul all-metal machine, P.10, is the machine of the show, from a constructional point of view. Mr. J. D. North aided by a very able staff of assistants has here produced something which marks a very real step forward in aeroplane construction. Personally we have always been believers in metal construction for aircraft, but we admit that until now we had scarcely thought the time ripe yet for its introduction. After seeing the P.10 and discussing it with Mr. North, we are inclined to think that the time is already here when metal construction, if scientifically carried out, is not only possible as a substitute for wood, but is even superior in many respects. For instance, the weight of the P.10 actually comes out lighter than the same machine built in wood in the ordinary way, while its strength is, if anything, superior to that of the wood machine. This, however, is not the chief point of the design, although it incidentally proves to what state of perfection Boulton and Paul have carried metal construction. The chief advantage will probably be found in the longer life of the steel structure. We understand that although ordinary steel and not rustless steel been used, the manner of treating and varnishing the metal components has proved so effective that prolonged tests have failed to show any signs of the metal parts rusting after prolonged exposure to moisture. The effect which this side of the question of metal construction will have upon the life of a machine can hardly be exaggerated. For use in tropical climates especially, the steel machine should last very much longer, and consequently be cheaper in the long run, than would one of the ordinary wood construction.
In the space at our disposal in a show issue we cannot hope to do justice to a machine like the P.10, but we hope at some future date to be able to publish a detailed account of its constructional features. In the meantime, a few brief notes will have to suffice. The fuselage of the B. and P. P.10 is built up, as regards the front part, of four tubular longerons. In the rear part the body is of the monocoque type, with oval formers of channel section, placed back to back and connected by short lengths of tube. The longitudinal stringers are also of steel, of a double S section. The covering is in the form of special fibre sheets, riveted to the metal parts. This sheet is fire and damp resisting.
The two seats are placed in tandem, and dual controls are fitted. The engine - a three-cylinder radial air-cooled Cosmos Lucifer - is so mounted that the engine, by undoing a long hinge bolt, can be swung around the bolt on the opposite side, when the back of the engine with its accessories is readily accessible. This is an excellent feature from the practical point of view, and one to which more attention should be paid generally. The piping, etc., is so arranged that it does not require disconnecting when the engine is swung out. In the accompanying sketch the piping and other paraphernalia are omitted for the sake of clearness.
The wing structure is also entirely built of rolled steel sections, the shape of which may be seen in one of our sketches. The spars are roughly of I section as regards their external shape, but are built up of thin, rolled sheet steel. The flanges are corrugated and are attached to the webs by riveting. The webs are provided with lightening holes, slightly flanged to give greater stiffness. The two web plates are connected at intervals by horizontal lengths of tube, these tubes being flanged over both inside and outside the web plate so as to prevent it from bending laterally. The manner in which this is done is extremely neat, and must have required a number of experiments before a satisfactory way was discovered. Later, we understand, these tubes will be replaced by sheet steel rolled into a tubular shape.
The inter-plane struts, which in the show machine are of ordinary stream-line tube, but which will later be replaced by built-up sheet steel struts, are attached to the compression struts a short distance inside the spars, which makes a very neat and compact job of an otherwise somewhat awkward joint.
The undercarriage is at present of the usual Vee type with stream-line steel tube struts and rubber shock absorbers, but later an oleo undercarriage will be fitted. With this wholly inadequate reference we must leave the P.10, hoping to return to it in more detail at a later date.

The P.10 at the Paris Salon of 1919. The fuselage panels were made of Bakelite-Dilecto.

The Boulton and Paul P 10: Seen from the gallery

The Boulton and Paul P 10: This machine is built entirely of metal, and should prove a great attraction at the Show 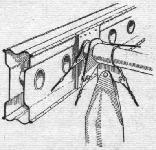 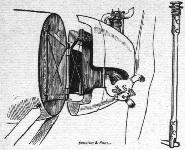 THE BOULTON AND PAUL P 10: Sketch showing hinge mounting of engine, and on the right, one of the substantial hinge rods on the Boulton and Paul P 10