A battle-stained Sikorsky biplane, which returned with 374 bullet and shrapnel holes in it, and a front strut shot away. On the left a view of the cabin, and on the right the damaged radiator of the 150 h.p. Sunbeam engine 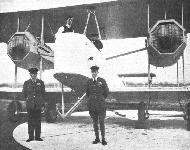 LONDON-CAIRO-CAPE TOWN AIR-WAY: Lieut.-Col. P. Van Ryneveld, D.S.O., M.C., and Capt. C.J.Q. Brand, D.S.O., M.C., D.F.C., the Pilots and "the Crew" of the Vickers-Vimy-Rolls aeroplane "Silver Queen," on which they started from Brooklands last week to fly to Cape Town in connection with the Union of South Africa Government flight. The "Silver Queen," partly seen in the photo., is a replica of Capt. Sir Ross Smith's machine, on which he successfully accomplished the London-Australia flight

The Napier Lion installed in an Airco 16

Messrs. S. Instone and Co., Ltd., and their new London-Paris service from Hounslow Aerodrome: The "mail" is loaded aboard the Airco express 'bus

THE NAPIER LION: View from above, showing installation in a Handley Page W 8

LONDON CAIRO CAPE BY AIR: The Vickers-Vimy-Rolls commercial machine, chartered by The Times, which is now en route by air for Cape Town via Cairo.

LONDON-CAIRO-CAPE BY AIR: Start of the Vickers-Vimy-Rolls aeroplane at 11-30 a.m. from Brooklands on January 24 1920. Below (left) the machine is just leaving the ground, and on the right she is “well away” 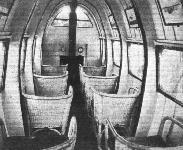 CHILE AND AVIATION: Some months ago the Chilian aviator Capt. Armando Cortinez made a very fine flight in a Bristol monoplane, being the first pilot to make the double flight over the Andes from Chile to Argentina and back. Capt. Cortinez is at present in this country studying British aviation and aeroplanes. On a recent occasion he was taken up by Mr. F. Uwins, the Bristol test pilot, in a Bristol "Tourer," and very much enjoyed his flight. His compatriot Senor Claude, one of the leading coal magnates of Chile, also was taken for a flight, and the opinion of both is that Chile must make extensive use of aircraft

THE THREE-ENGINED CURTISS "EAGLE" EIGHT-PASSENGER AERIAL LIMOUSINE: Top - The machine in flight. Below - View of the three engines and a close-up view of the pilot's quarters 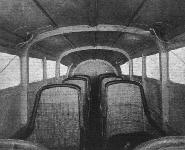 Interior view oi the cabin of the three-engined Curtiss "Eagle" eight-seater aerial limousine, which was described in a recent issue of "Flight"

The Rolls-Royce Falcon installed in a Westland limousine

The 450 h.p. Cosmos "Jupiter" fitted in the Bristol Bullet

THE HELICOPTER UP TO DATE: The French "Alerion," a twin-screw direct-lift machine, the patents for which have been purchased by the French Government. The two screws are built as ordinary wings, and will have external bracing

Messrs. S. Instone and Co., Ltd., and their new London-Paris service from Hounslow Aerodrome: A D.H.4 with Rolls-Royce engine ready to start for Paris;

At Cricklewood Aerodrome: Officially inaugurated London-Paris Handley Page service. Ready to start. The mechanics removing the propeller-guards
After the war, a number of O/400 bombers were converted into commercial aeroplanes. One of the first of these is shown here.

At Cricklewood Aerodrome: London-Paris Handley Page service. Unloading the freight from an H.P. on February 18, 1920, upon arrival at the aerodrome. Pilot Lieut. Beal on the extreme right