THE BOULTON AND PAUL "BODMIN": This machine has several very interesting features, chief of which Is the central placing of the engines (Napier "Lions") in the fuselage, with drive to four propellers mounted between the planes.

The first P.12 Bodmin, J6910, showing the radiator and transmission 'fairing' out to the propeller housings.

AN EXPERIMENTAL MACHINE AT THE R.A.F. DISPLAY: The Boulton and Paul "Bodmin" (two 400 h.p. Napier "Lions") with gear transmission. 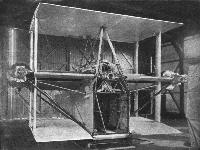 THE BOULTON AND PAUL "BODMIN": View of the engine room and transmission.

THE BOULTON AND PAUL "BODMIN": On the left, one of the gear casings, the tractor and pusher screws, and two main petrol tanks slung on a tubular braced member. On the right, a view of the tail skid, etc.

THE BOULTON AND PAUL "BODMIN": Details of tail plane, spar and bracing strut attachment. The elevator has leading edge balance, and is carried on brackets from the rear spar. In the lower left-hand corner is shown the attachment of the tail plane bracing strut to the rear face of the spar. On the right, a typical fuselage fitting and section of longeron.