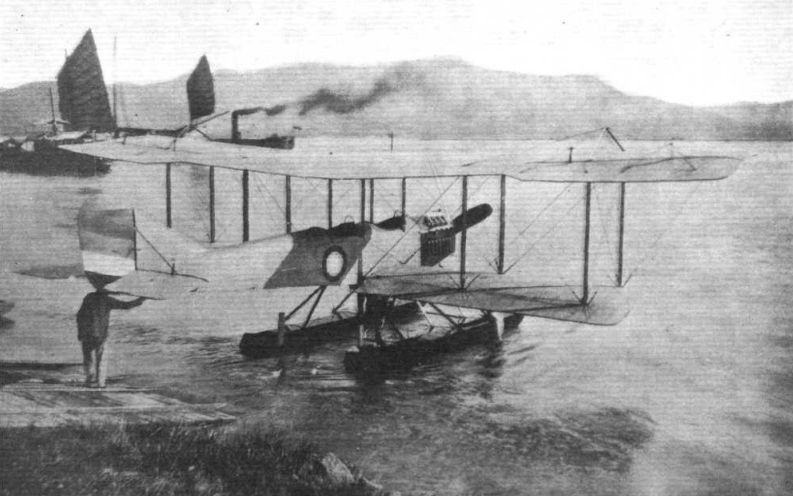 <...>
Type "Char." - This was designed for primary training. The first machine of its type was completed towards the end of 1918. It was a tractor biplane with twin-float ДальшеMore>>> arrangement for undercarriage. The wings and tail surfaces were of Shanmu and silk construction. Interplane bracing was effected by two pairs of streamline Shanmu struts on each side of the fuselage, together with high-tensile steel bracing steel wires. The floats were of streamline form and had V-bottoms. Keels and chines were of elm and frames of Shanmu. The skins of the floats were planked by two plies of narrow thin strips of Shanmu. The two plies were laid at right angle to each other, each ply being at about 45 degrees with the fore-and-aft axis. Between the two plies of planking there was a layer of fabric impregnated with waterproof marine glue to ensure watertightness and strength. Each float was divided into five watertight compartments, and was designed with 100 per cent, reserve buoyancy.
This machine was powered with an 8-cylinder, V-type, water-cooled Curtiss engine developing 100 h.p. at 1,400 r.p.m. Its high speed was 75 miles per hour and landing speed 35 m.p.h.
<...>
Type "Yee." - In general construction this type was similar to Type "Char," except that the wing area was smaller and the high speed and landing speed were increased to 90 and 40 m.p.h. respectively. This type was designed for use by students after they had mastered Type "Char." It was fitted with a 4-cylinder vertical water-cooled Hall-Scott engine, the power and speed of which were the same as the Curtiss engine. It has two side radiators, one mounted on each side of the fuselage and slightly behind and above the engine, whereas in Type "Char" a nose radiator was fitted.
Both Type ''Char'' and Type ''Yee'' were designed to a minimum load factor of eight and their loaded weight was about the same, viz., 2,100 lb. The range for each was about three hours, flying at high speed near sea-level. As at first constructed, the petrol tank was installed under the student's seat. Feed to the engine was therefore by pressure. On later machines, the tank was mounted in the top centre section. Feed was hence by gravity, thereby not only weight and work were saved, but, most important of all frequent troubles incidental to the pressure system were eliminated.
<...>