IN common with air transport concerns of other countries, Czechoslovakia has found that multi-engined machines are essential for the economical and safe operation of air lines where the volume of traffic and the distances covered are normally important. A little while back the Military Aircraft Works (Letov) of Praha - a firm which has hitherto concentrated on the production of military aircraft - were asked to produce a 3-engined commercial machine carrying four to six passengers, primarily for use on the night service route Praha-Bratislava-Uzhorod-Bucharest. This route lies almost entirely over mountainous country, and there was therefore a demand for a machine that could fly at high altitudes possessing at the same time a quick take off, good climb at normal speed, and a low landing speed.
In response, the S.32, shown in the accompanying illustration, was constructed, incorporating the latest modern improvements in aircraft design. It is a 3-engined cantilever monoplane of all-metal construction with the exception of the rear part of the fuselage and the tailplane, which are fabric-covered. The fuselage is constructed of steel tubes and duralumin, which are secured by bolts - no welding being employed.
The cabin is particularly roomy and lofty, so that passengers can move about freely. The ventilation is good, but not draughty, and doors are fitted on both sides of the cabin, with a safety door in the roof. Room for luggage is provided both in front and at the rear of the cabin, and between the central engine and the pilot's cockpit is a fireproof wall.
Comfortable seats with removable cushions for four or six passengers are fitted and large side Triplex windows provide an unobstructed view. The walls inside the cabin are in imitation leather, between which and the outer metal wall of the fuselage is inserted a soundproof material to reduce the noise of the engines. Racks for light luggage are provided above the seats, while fire extinguishers and various instruments are also fitted in the cabin. At the rear of the latter is the lavatory and space for luggage - but if this is not required the space can be utilised for extra passengers.
The pilot's cockpit is located at the leading edge of the wing, where he has a good view forward, sideways and upward. In the event of a crash, the pilot has easy means An interior view of the cabin of the Letov S.32 of escape by way of the doors communicating with the cabin; it may be mentioned that a window is provided between the pilot's cockpit and the cabin, so that the occupants of both can see each other.
The cantilever wing is entirely covered with duralumin, and is built up in three separate parts round a central box spar, the leading and trailing portions being easily dismantled, to facilitate transport. The tail surfaces, as previously stated, are fabric covered, and the rudder is balanced. All controls are inside the fuselage, being very accessible, and the tail plane can be adjusted during flight.
Three Walter "Mars" engines, of 140 h.p. each, are fitted, one in the nose of the fuselage and two under the leading edge of the wing. The special engine mountings allow of the easy removal of the engines, while detachable cowlings provide easy adjustment. The petrol tanks are placed in the wings, some distance from the fuselage, and all three engines can be fed from either of these tanks; the feed is by gravity, and flexible "Superflexit" tubing is employed. "Letov" metal airscrews, with adjustable blades, are fitted.
The undercarriage is of the non-axle type, having a wide track and fitted with Messier Oleo-pneumatic shock absorbers. The 900 X 200-mm. Palmer wheels are provided with brakes. A tail wheel, with a movement of 30 deg., is fitted instead of the ordinary skid.
The "S.32" complies with the requirements as to factors of safety as laid down by the National Commission for Aeronautics.

THE LETOV S.32: This front view shows the wide undercarriage. 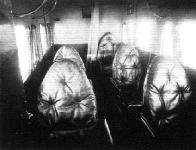 An interior view of the cabin of the Letov S.32