Altogether three machines were shown by Rene Caudron, two in the Grande Nef, and one in the gallery. Of the two machines exhibited in the main hall one is the C 25, a very large three-engined biplane, ДальшеMore>>> carrying 16 passengers in addition to two pilots, or one pilot and one engineer or wireless operator. The other is a smaller machine, the C 33, which is fitted with two 80 h.p. le Rhone engines, and carries three passengers in addition to the pilot. Although both machines have many points of interest, they are not altogether above criticism, and the general impression of them is that they are somewhat behind the time.

The second machine shown in the Grande Nef is of very much neater appearance. It is a type C 33, with two 80 h.p. le Rhone engines placed on the wings. In addition to the pilot it carries three passengers, two of whom are accommodated inside a neat little cabin, while the third sits in the front seat in front of the pilot. The two seats in the cabin are of the wicker-work variety, comfortably upholstered and mounted on a swivel, so that the occupants can turn about slightly and stretch their legs, which is a consideration on a long journey. With three passengers and six hours’ fuel the machine does a speed of 93 m.p.h., which is by no means bad for a total of only 160 h.p.

THE CAUDRON C.33: This machine is named “Monsieur-Madame.” 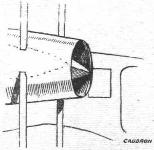 THE CAUDRON C 33: The wedge-shaped tanks behind the Rhone engines are enclosed in a cowl terminating at the back in an open truncated cowl.
<<   0/0   >>