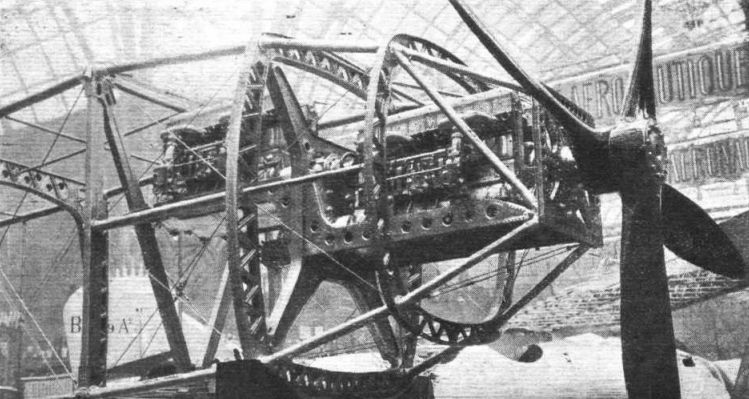 THIS firm has not been able to complete in time for the Show the new giant Breguet "Leviathan" which is now in course of construction at the works of this French firm. The ДальшеMore>>> machine, of which a scale model will be exhibited at the Show, has been designed to utilise the Breguet-Bugatti power unit exhibited at the Paris Aero Show. This power unit, it will be remembered, consists of two double Breguet-Bugatti engines placed end to end, and one slightly higher than the other. Each engine consists of two banks of eight cylinders placed vertically and side by side. This arrangement has been made use of to accommodate the propeller shaft, which runs between the two banks of cylinders. A series of automatic clutches ensure that in case of a breakdown the faulty engine is automatically thrown out of gear, and the only consequence, as far as flying the aeroplane is concerned, is the loss of one-fourth the power until the engine can be repaired. In the "Leviathan" provision has been made for doing repairs during the journey, as the engine-house is of ample proportions, allowing a mechanic to get at either engine and clean sparking plugs, adjust tappet rods, or effect any other minor repairs or adjustments that may be required. It is therefore claimed that the "Leviathan" will be the equal of the airship in reliability, since it will fly comfortably with three engines running, and will only need to lose a comparatively small amount of altitude with only two running. There is thus, it is claimed, little likelihood of a forced landing en route. If this proves to be borne out in practice a great step forward has been made in commercial, aviation, since the forced landing is one of the greatest dangers of a long journey, especially in thick weather.
The accompanying diagram shows the general arrangement of the fuselage of the "Leviathan," from which some idea may be formed of the magnitude of the machine. We would, however, advise our readers to visit the Breguet stand and there inspect the model of the machine, as this will give a much better representation than can a small diagram. Behind the engine room, it will be seen, is a large passenger cabin with seating accommodation for about twenty passengers. Behind and slightly above, the cabin is the pilot's cockpit, over which is a small streamline housing with windows. Behind the pilot and under the same roof, so to speak, is the wireless cabin, for of course the "Leviathan" will be provided with this modern adjunct to air travel.
From a constructional point of view the "Leviathan" is of interest as being of the all-metal type. The weight of the machine empty is to be 5,500 lbs., and when full load is carried the weight will be in the neighbourhood of 5 tons. The load can, of course, be made up of a large quantity of fuel and a crew of three only, or of a smaller amount of fuel and a larger number of passengers, according to the purpose for which the machine is to be used. The span is 85 ft. 9 in., and the wing area is 1,500 sq. ft.

As regards the " Leviathan " fuselage shown, this is not an altogether new construction, but has been under way for a couple of years or so. As exhibited, the machine has one of the quadruple Breguet-Bugatti power units mounted in the nose, although from a catalogue and specifications, the machine is represented as having two engines on the wings and none in the fuselage. Whatever form the machine will ultimately take, it is chiefly interesting on account of its all-metal construction. The fuselage has Duralumin tubular longerons, joined by frames built-up of Duralumin latticework. The tie-rod bracing runs from the corners of the frames, but auxiliary tubular struts are fitted halfway between the main frames, and the wires cross in the centre of these auxiliary struts. As the machine is shown without wings, it is not possible to state exactly what form of construction will be employed, but it appears probable that it will not differ greatly from that of the "Sesquiplan."
As regards the finished machine, it is understood that it has been "specially studied" with a view to running it on the Paris-Marseilles-Algiers and Paris Madrid-Cassablanca routes. If the figures given by the makers are exact - they are probably estimated and not actual figures - the machine will be one of the lightest yet built. Thus, while the weight of the machine empty is given as 3,000 kg. (6,600 lbs.), the load is given as 3,500 kg. (7,700 lbs.). This would appear to indicate a very great saving in structure weight effected by the use of Duralumin construction.
The following are the general characteristics of the "Leviathan," type XXII: Engine, two double Breguet-Bugatti type C.V. of 450 h.p. each; span, 83 ft. 9 ins.; wing area, 1,500 sq. ft.; length, o.a., 46 ft.; height, 16 ft. 4 ins. Dimensions of cabin, length 23 ft.; width, 6 ft. 6 ins.; height, 6 ft. 6 ins. Weight of machine empty, 6,600 lbs.; load, 7,700 lbs.; total weight, 14,300 lbs.; load per sq. ft., 9-53 lbs.; load per h.p., 15-9 lbs. The under carriage is to be of the amphibian type, with twin floats of Duralumin and a small float under the tail.
According to the range required the machine carries 20 or 25 passengers, and their luggage. For a range of 600 kilometres (370 miles) par vent nui, the number of passengers is 25, while with 20 passengers and more petrol the range is 1,100 km. (680 miles).
A large seaplane float made of Duralumin is also shown by this firm, as well as smaller wing tip floats. The Germans have already made successful use of Duralumin construction for floats, and the metal appears to stand up well to the work, while not, apparently, being affected by the action of sea water, as is ordinary aluminium. A complete metal-covered wing is also shown.

As a wonderful effort in metal construction on a large scale the Breguet "Leviathan” type XXII, with two Breguett-Bugatti double engines, compels attention by its excellent workmanship and by the very ingenious detail design. When, however, one comes to take into consideration the cost of production and the revenue-earning capacity of the machine as a commercial aeroplane, one cannot help feeling that better value for money could have been obtained with a simpler and cheaper construction in wood. The Duralumin used must have cost a very considerable sum merely as metal. By the time it has been turned into trellis-work frames, channel-section strip covering, etc., land the innumerable small parts riveted together by literally countless rivets, the cost must be tremendous. Before such a machine could be a commercial proposition it would have to be extremely economical to run. Yet according to the estimates of the makers, the useful load - i.e., the lift available for passengers and freight - is 2,200 kgs. (4,840 lbs.), or, on a basis of 480 h.p. each for the engines, the useful load is about 5 lbs./h.p. This figure is reached, or even exceeded, by several British machines which have cost but a small fraction of the price of the "Leviathan."
That the Duralumin construction does give a considerable saving in structure weight seems evident from the fact that the structure weight of the "Leviathan" type XXII is only 50 per cent, of the total loaded weight, the actual figures being 3,150 kgs. (6,930 lbs.) and 6,400 kgs. (14,080 lbs.) respectively. This is certainly good for a machine of this type, but still it does not appear to offer reasonable repayment for the high first cost.
The Breguet type XXII is a twin-engined tractor biplane, with the double Breguet-Bugatti engines placed on struts between the wings. The fuselage is of a form of construction similar to that of the single-engined "Leviathan," i.e., with tubular Duralumin longerons and built-up lattice-work frames. The bracing is unusual in that the cables are looped over pulleys so that actual duplication of the cables can scarcely have been effected. A most luxurious cabin is provided, with tables in front of all the seats, and as exhibited at the Show the machine has the covering of the cabin removed from the port side, wax figures being symbolical of future passengers. As a piece of showmanship the tableau is very effective. The front portion of the fuselage is covered with very thin Duralumin in the form of narrow channel sections about 1 in. wide, running in a fore-and-aft direction. On the inside these channels are joined together by narrow U-section strips passed over the sides of adjoining channels, the whole riveted together. It appears probable that during flight this form of covering acts like a drum, as it was noticed that if a finger was pressed on the covering a crackling sound resulted.
The wing bracing of the Breguet "Leviathan" type XXII is somewhat unusual. Of main interplane struts there are but two on each side, and these are of the single type with forked ends, first introduced on the Breguet "Sesquiplan" last year. In between these main struts are auxiliary struts, hinged in the centre, through which the bracing cables pass, much after the fashion of the early-type Spads. The landing cables are arranged in a manner similar to the fuselage bracing cables, i.e., they are apparently double, but pass over pulleys at the strut fittings. The main lift wires are in triplicate, a stout cable in the centre, with two smaller cables in front of and behind the larger cable. The end attachments are shown in one of our sketches.
The undercarriage consists of two double and converging Vees on each side, carrying a single, large-diameter Palmer cord tyre. We were not able to ascertain whether or not any springing is provided other than that furnished by the tyre. There is no external evidence of any shock absorbers.
A fuselage of the single-engined "Leviathan" is also shown, the construction of which is exactly similar to that of the twin-engined machine The 14T single-float seaplane has already been illustrated in FLIGHT, and does not call for any comment.

Sketch showing one side of the undercarriage of the twin-engined Breguet "Leviathan."

FUSELAGE FITTING AND BUILT-IN FORMER OF BREGUET "LEVIATHAN": On the right the peculiar wing-bracing wire fitting, with a stout central cable and two smaller cables front and rear.