MORE than usual interest attaches to the new D.H. 29 monoplane which has just been finished at the Stag Lane works of the de Havilland Aircraft Co., not only on account of the fact that ДальшеMore>>> it is the first commercial aeroplane designed and built in this country to employ wings of the cantilever type, but also by reason of the many novel features incorporated in the design, quite apart from the internally braced wings. We think that we are correct in stating that when Captain de Havilland decided upon laying down the first of these machines, he had quite an open mind on the subject of cantilever wings. In certain quarters the cantilever wing has been dismissed with the off-hand remark that "there is nothing in it." By others it has come to be looked upon as the solution of all troubles, "a sort of blessed word, something like Mesopotamia," as Mr. J. P. North said at the air conference last year. As is usual in these cases, the truth is probably somewhere between the two extremes. It would appear that Captain de Havilland still retains an open mind on the subject, since his next commercial machine (first described in FLIGHT last week) is to be a biplane. This fact should not, however, be taken as an indication that de Havilland has met with disappointment in the monoplane. Far from it. As far as can be seen at present, the monoplane has justified itself, although until searching tests have been made it is too early to say whether or not it is an unqualified success. As the first of the monoplanes is now at Martlesham undergoing Air Ministry tests, official performance figures should be available before long. It should be remembered, however, that even if these prove as good as one has every justification for expecting they will be, there are other factors, apart from performance, which count heavily in a commercial machine. These can only be ascertained by actual use on the airways, but unless some unforeseen and unforeseeable drawback comes to light, the D.H.29 should mark a real milestone in commercial aeroplane design, and Captain de Havilland and those associated with him deserve well of the aviation world in general for their courage in trying out the experiment.
At present two of the D.H.29 monoplanes have been built. One of these was for the Air Ministry, and may not be referred to here. The second machine is being fitted up for commercial work, and is the one which forms the subject of the present description.
The first impression one receives in looking at the 29 is that the wing area is totally inadequate. This is, of course, due to the fact that a thick section high-lift wing is employed, which has a high Lc max. and thus gives the same landing speed for a much higher wing loading. It is a curious fact that the wing area of the monoplane is practically the same as that of the D.H.4, which was quite a small machine, while the monoplane carries 12 people, 10 passengers inside the cabin and a pilot and navigator outside in front. When once one has become accustomed to the somewhat unusual appearance of the machine, she looks very pleasing indeed with her substantial fuselage and sharply tapering wings.

The De Havilland "29" Monoplane paid a flying visit to Croydon on Monday.

FROM THE AIR CONFERENCE VISIT TO WADDON: The picture shows visitors inspecting the machines lined upon the aerodrome.

FROM THE AIR CONFERENCE VISIT TO WADDON: The photograph gives a good idea of the different types of machines on view. Vickers "Vimys," "D.H." monoplane, and several types of "D.H." biplanes, Bristol Ten-seater, Farman Goliaths, etc. 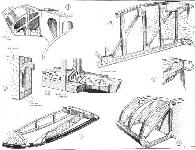 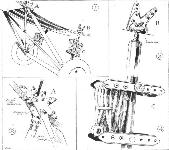