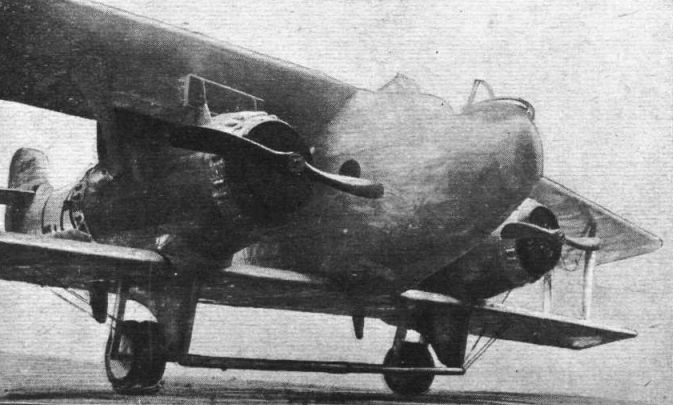 A huge fuselage was also exhibited on the Latecoere stand. This is for a bomber, and is one of the most remarkable pieces of metal construction ДальшеMore>>> in the whole of the exhibition. The metal employed is Duralumin throughout, and nearly everywhere it is employed in the form of channel sections. A number of these run longitudinally, with others intersecting them diagonally, the latter wrapping spirally around the fuselage. Vertical formers or bulkheads serve as supports for the diagonal and longitudinal stringers. The remarkable feature about the construction is that all diagonal and longitudinal stringers are in short straight pieces, attached to the formers via small Duralumin plates at the points of intersection. As there appears to be one rivet only securing the ends of the stringers to these plates, the structure appears to be none too strong, but one understands that it is intended to cover the whole fuselage with thin sheet metal. By the time this is riveted to the basketwork with a few hundred thousand rivets, there will probably be sufficient strength in the structure. But what an enormously expensive fuselage it must have been. And any gains which one might hope for by this form of construction must have been outweighed many times by the time and cost involved. Frankly, we do not think the design a good one, and as regards the workmanship the less said the better. A great percentage of the rivets appear to have been placed dangerously close to the edges of the metal, which here and there has split from the rivet holes to the edge.
The "Lat.6" is intended, as already said, for a bomber, and is in addition to be provided with a very full complement of guns, according to a sketch elevation given in a catalogue. According to the brief specification, there are to be four engines of 250 h.p., placed in pairs on the wings. The general characteristics are to be as follows: Length o.a., 51 ft. 8 ins.; span, 84 ft.; height, 20 ft. 6 ins.; wing area, 1,300 sq. ft.; total loaded weight, 11,600 lbs.; wing loading, 8-9 lbs./sq.ft.; power loading, 11-6 lbs./h.p.; speed near the ground, 142 m.p.h.; speed at 13,000 ft., 133 m.p.h.

ONLY one machine was exhibited this year by Societe Industrielle d'Aviation Latecoere, but what the exhibit lacked in numbers it made up for in size. The Latecoere "L.A.T.6" is a huge four-engined bomber, with the 260 h.p. Salmson engines placed in tandem on the wings. The fuselage of this machine was exhibited at the 1921 Paris Show, when both its design and construction came in for considerable criticism. Nor is it probable that the critics, after seeing the finished machine, will have changed their views. To begin with, the tandem arrangement of engines has been found years ago to be bad aerodynamically, owing mainly to the fact that the airscrew of the rear engine is working in the slip stream from the tractor, and consequently has to have a greater pitch, as it is working in air of greater velocity. Secondly, the many projections on the machine must have a very adverse effect upon the efficiency, although if the advantages aimed at are attained, this price might not be considered unduly great. In the "L.A.T.6" the reasons have obviously been to provide gun platforms in positions where there was a good field of fire, so as to enable the machine to be independent of escorts for fighting off attackers. Thus there is a gunner's cockpit in the extreme nose, and another aft of the wings, formed by a projection shaped somewhat like the counter of a yacht, from which the gunner can sweep an entire semi-circle, or even slightly more.
Constructionally the Latecoere bomber is of interest mainly on account of the fact that it is built of Duralumin. In spite of its great size the L.A.T.6 has but one pair of inter-plane struts on each side, and this in spite of the fact that the engines are mounted on the wings. The wings are built up of a number of spars, of which the two main ones are double. These are of the lattice type, as are also the single auxiliary spars or stringers. The ribs are little more than fiat bands passed over the main and secondary spars, being in fact of very flat trough section and serving mainly for the attachment of the sheet Duralumin covering.
The wing bracing is of interest on account of the fact that the lift wires pass through the lower plane from the undercarriage struts, and are attached at the top, not to the spars, as is usual practice, but to the large-diameter compression tube of the drag bracing. This tube passes through the centre of the spars, and by attaching to them the lift and anti-lift wires and inter-plane struts the fitting is considerably simplified. We have seen the same arrangement before, on, we believe, the Boulton and Paul all-metal two-seater shown at one of the Paris Aero Shows.
The undercarriage has been entirely re-designed since the previous Show, when the fuselage of the L.A.T.6 was shown with two short wing roots and the undercarriage struts passing through the lower plane, inside which the shock absorbers were housed. At the recent Paris Show the machine was exhibited with a very wide undercarriage, consisting of a set of wheels under each pair of engines. Triangulation was by means of the wing bracing, no transverse bracing being employed between the two halves of the undercarriage.
The main characteristics of the L.A.T.6 are as follows :- Length, o.a., 51 ft. 8 in.; span, 84 ft.; height, 20 ft. 6 ins.; wing area, 1,300 sq. ft.; total loaded weight, 11,600 lbs.; wing loading, 9 lbs. /sq ft.; power loading (1,000 h.p.), 11.6 lbs./h.p.; estimated speed near ground, 142 m.p.h.; speed at 13,000 ft. 133 m.p.h.

The Latecoere L.A.T.6: Front view of machine, showing nose of fuselage and also the new undercarriage.

The Giant of the Show: The huge Latecoere four-engined, all-metal biplane.

THE LATECOERE L.A.T.6: This photograph of the fuselage was taken at the 1921 Paris Show, and shows the peculiar construction. The undercarriage has been entirely re-designed since then.

SOME LATECOERE DETAILS: The details of the crutch arrangement of the shock absorbers inside the wing root of the all-metal fuselage.