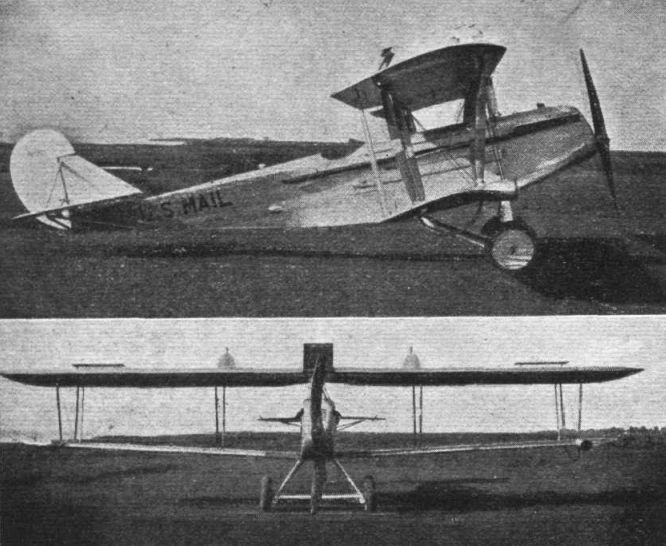 A LITTLE while back the U.S. Air Mail Service issued tenders for a certain number of aeroplanes designed specially to meet the various requirements for night mail service. As a result three types of ДальшеMore>>> machines have already materialised, one from each of three well-known American aircraft constructors - the Aeromarine Plane and Motor Co., of Keyport, N.J., the Curtiss Aeroplane and Motor Co., of Garden City, N.Y., and the Glenn L. Martin Co., of Cleveland. We give below brief descriptions of these three machines, together with illustrations. It may be mentioned that these machines are intended for use on the "night section" of the New York-San Francisco air mail service, that is, the section between Chicago and Cheyenne.

The Aeromarine Night Mail 'Plane. - The machine designed and built by the Aeromarine Co. is a two-bay tractor biplane with metal fuselage, and fitted with a high compression 400 h.p. Liberty engine.
The fuselage is kept very narrow in order to decrease resistance and improve the pilot's vision, and tapers considerably towards the rear. It is of plate girder (semi-monocoque) construction, built up entirely of duralumin (17/S/alloy) sheet. The covering is 1/32-in. thick, the bulkheads vary from 1/32-in. to 1/16-in., and the longerons, of angle section, are 1/16-in. thick. Heavy reinforcements of 1/16-in. duralumin are introduced at points where openings occur, such as the pilot's cockpit, mail compartment, etc. The engine is completely and very neatly cowled in, ample ventilation being provided. The engine mounting is made up of steel tubing and wooden bearers. It is an easy matter to remove the cowling, which is in four parts, each secured by long hinge pins, and when removed, the engine is left exposed on all sides, allowing all repairs to be made with great facility. Ample clearance is left between the engine and the fuselage proper, thus providing easy access to distributor heads, generator, water pump, petrol strainers and engine controls.
The oil tank is located under the engine, and acts at the same time as oil radiator - the cooling being regulated by opening or shutting doors in the lower cowl. The engine radiator is mounted on the top plane at the leading edge, and is supported by two brackets. It is easily removed by undoing three nuts and two water connections. Sufficient clearance is left between the radiator and the plane in order to increase the flow of air through the lower part of the core, and to reduce interference to air flow of plane at this part. The radiator is provided with shutters.
It will be noticed that the top plane is of larger span and chord than the lower one, the two planes being staggered so that the rear struts are perpendicular to the chord. This arrangement of wings is claimed to be particularly advantageous when good load-carrying capacity and climb are required. It also allows better field of view for the pilot. The lower wings only are given a dihedral angle.
Aeromarine No. 2A wing curve is used on both planes. This curve is an improvement of No. 2, originally designed for use on Air Mail 'plane type WM (converted DH4) which was described in FLIGHT for November 16, 1922. This curve not only gives a low landing speed (45 m.p.h.), but enables loads to be carried far in excess of the ordinary if required in emergency. Furthermore, being comparatively thick, deep and strong wing spars are used. These are of heavy I-section spruce with built-up spruce ribs. A feature of the wing construction is that the centre lines of front and rear spars are in line with the centre lines of the struts. This enables very simple and effective strut fittings being used, and eliminates offset bending movements in any direction. The wing bracing is of the two-bay type, the top planes being attached to a central cabane over the fuselage. The interplane struts are of Navy No. 1 section, which together with streamline bracing wires give very small parasite resistance.
Large ailerons are fitted to both top and bottom planes, and the upper ailerons are balanced by means of small balancing panels.
Two petrol tanks, of 50 gal. capacity each are mounted on the top plane, giving a gravity feed with 3 to 4 ft. head. These tanks are of welded aluminium alloy sheet barrel construction, and are streamlined by metal and fabric fairing.
The tail surfaces are also constructed of 17 S. alloy, and can be removed from the fuselage as a unit. The horizontal stabiliser is adjustable from the pilot's cockpit.
The landing gear is of the conventional V type, with a comparatively wide track - 7 ft. 6 ins. - so that the wheels and shock absorber units are entirely out of the slipstream.
The principal characteristics of this machine are :- Span, 50 ft. (top), 45 ft. (bottom); chord, 7 ft. (top), 5 ft (bottom); o.a. length, 32 ft. 11 ins.; height, 12 ft. 9 ins.; area, 540 sq. ft.; mail space, 45 cubic ft.; weight empty, 2,875 lbs.; weight laden, 4,450 lbs.; loading/sq. ft., 8.2 lbs.; loading/h.p., 11.1 lbs.; speed range, 45-116 m.p.h.; climb with 600 lbs. mail, 6,500 ft. in 10 mins.; ceiling, 17,000 ft.
<...> 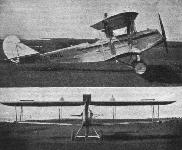