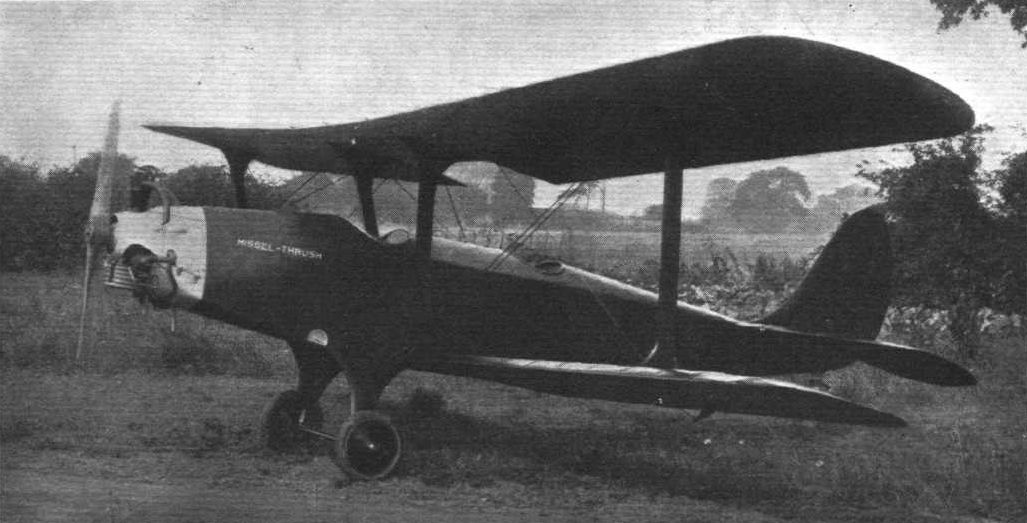 In the A.N.E.C. IV "Missel Thrush" entered for the Lympne competitions, the Air Navigation ДальшеMore>>> and Engineering Co, Ltd., of Addlestone, Surrey, have produced an entirely new type of light 'plane. In previous A.N.E.C. light planes high efficiency was aimed at above everything, but in this new model the constructors have seriously considered not only the question of high efficiency, but also - and to a considerable extent - the comfort of the pilot and the passenger for long flights. In short, it is an attempt to produce a machine suitable for the private owner which will be at the same time efficient, comfortable, safe and cheap.
The "Missel Thrush" embodies, of course, all the features called for by the rules of the competition, such as dual control, folding wings, etc., but nevertheless the aim has been to produce something more than a competition machine. The engine fitted in the "Missel Thrush" is, appropriately enough, the Blackburne "Thrush," a 3-cyl. air-cooled radial of 1,500 c.c., weighing 132 lbs. complete, and developing 35 h.p. at 2,500 r.p.m. - allowing a very good cruising speed at 2,000 r.p.m.; the airscrew is driven direct.
Fitted with a 6-gallon petrol tank, the range of action of this machine should be in the neighbourhood of 200 miles, the estimated top speed being 80 m.p.h. and the cruising speed 60 m.p.h. Its weight empty comes out at 500 lbs., while the overall dimensions are not too large for easy handling when on the ground - span 28 ft., length 21 ft. 6 ins., and height 8 ft.; the total wing area is 210 sq. ft.
The "Missel Thrush" is a 2-seater tractor fuselage biplane, with single I interplane struts, and is, as may be seen from the accompanying illustrations, an exceptionally pretty and well-proportioned machine. While, generally speaking, the construction of the "Missel Thrush" is a perfectly straightforward job, following orthodox practice, and in consequence permitting one of the main aims of the constructors being accomplished - viz., cheap and quantity production - its detail design is not lacking in original "brain waves." Great simplicity is the keynote everywhere, and - to lapse somewhat into Irish - even one or two of the "complicated" fittings are conspicuous for their simplicity!
Furthermore, this simplicity has not by any means been achieved by sacrificing strength - and this applies also in respect to the light weight obtaining throughout this machine, another outstanding feature of the "Missel Thrush."
We were fortunate to be able to inspect the "Missel Thrush" during its construction, and were thus able to obtain some idea as to the workmanship being put in. In this respect we were very favourably impressed indeed, for we have no hesitation in saying that this was of the best we have seen, even in larger and more expensive machines. The material employed throughout is, we are assured, of the best quality.

Turning now to the actual construction of the "Missel Thrush," pressure on our space will not allow us to deal as fully with every detail as we should like, and we can only, at the present moment, describe briefly some of the more noteworthy features. It should be mentioned that the designer, Mr. J. Bewsher, has paid considerable attention to the matter of streamlining and thoroughly "cleaning up" the machine everywhere externally, with the result that it is exceptionally free from all resistance-offering projections, and, wherever possible, corners, etc., have been neatly faired. On this point alone the "Missel Thrush" should make good in the matter of efficiency.
<...>

Whilst the undercarriage of the "Missel Thrush" is of the V-type, its design and construction form another feature of this machine. The chassis struts consist of a pair of steel tubes bent to form a narrow, curved V. Their upper extremities are attached to brackets on the lower longerons of the fuselage, while the lower ends are joined by a metal axle-box. In between the tubes are connected by flanged plates of streamline planform, and near the bottom by a metal distance block. Each complete strut unit is then faired with plywood covering, forming neat "peg-top trousers," as shown in our sketch. The lower extremities of each "leg" are connected by a wood cross strut, of streamline section, in the form of a trough, in which the main axle lies. The axle passes out between the tubes of the "legs," and is secured in place by rubber cord, which is wrapped round the "axle box" previously mentioned. The chassis struts are, of course, cross braced with cable.

The handsome ANEC IV Missel Thrush, G-EBPI, was designed by J. Bewsher for the 1926 Daily Mail lightplane trials at Lympne. It was destroyed on July 20, 1928 while competing in the King’s Cup race. It crashed in poor weather near Peebles, killing its owner/pilot.

SOME MORE COMPETING MACHINES: The ill-fated Anec IV (Siddeley "Genet II"), which, piloted by G. N. Warwick, crashed into the hills near Peebles. The Anec IV was designed by Mr. Bewsher and built by the Air Navigation Company. Originally it was fitted with a Blackburne "Thrush," but recently an Armstrong-Siddeley "Genet" was substituted, with a considerable gain in power.

THE A.N.E.C. IV "MISSEL THRUSH." SOME CONSTRUCTIONAL DETAILS :- (1) Shows the simple wing construction at the interplane strut-compression member section ; the leading edge is an aluminium tube, while the spar is of the box type, spruce and plywood. (2) Is the centre of the tail plane, which "sits" on the flat upper surface of the fuselage, and is held down by four long bolts passing from the latter through the fittings on the tail spars. Note, on the rear spar, the neat roller for the control cables. (3) The chassis struts, comprising steel tubes, forming a curved Vee, and connected at the ends by a streamline "trough" carrying the axle, are faired as shown by plywood.