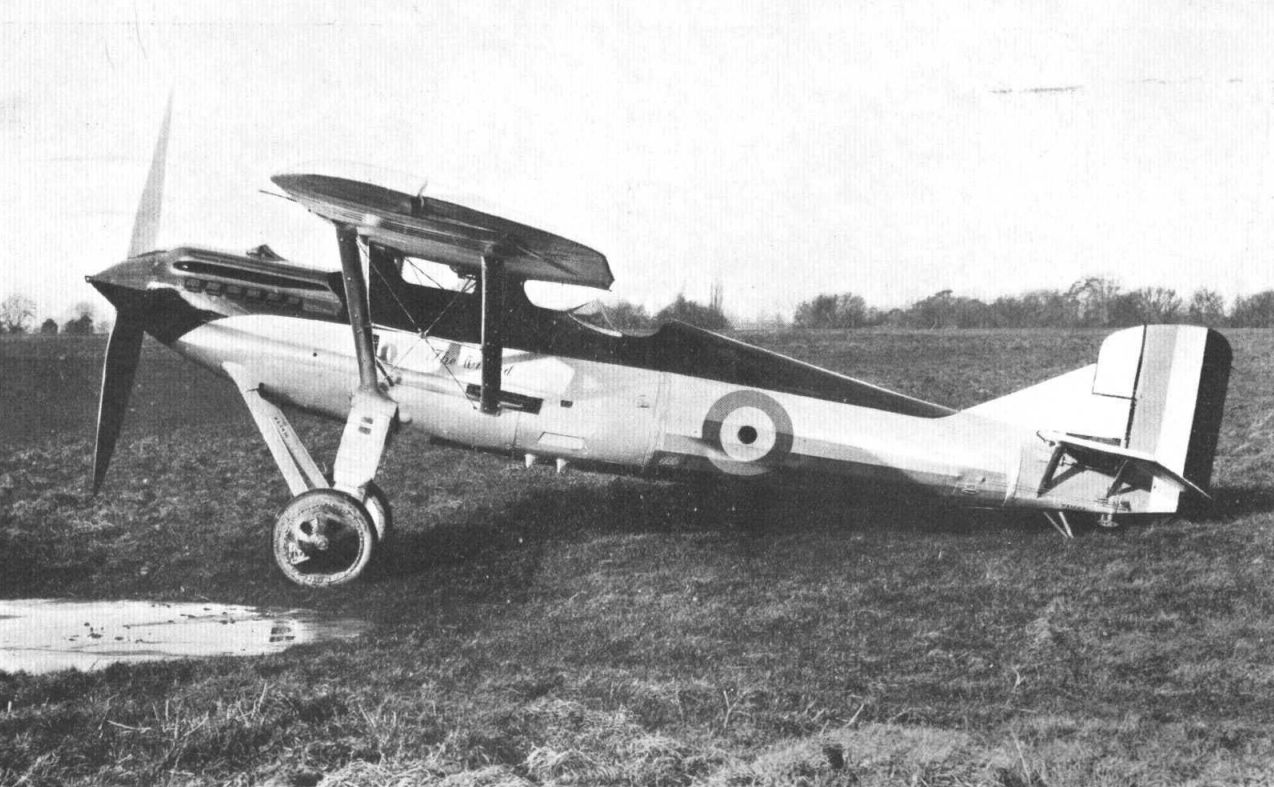 AMONG the new single-seater fighters which made their first public appearance at the Royal Air Force Display at Hendon last summer was the Westland "Wizard," which attracted a great deal ДальшеMore>>> of attention, not only because it was by way of being a rara avis among British service types of aircraft on account of its monoplane wing arrangement, but also by virtue of its exceptionally "clean" lines and generally attractive appearance. It has now become possible to describe this machine in some detail, and to illustrate it not only by photographs but also by three-view drawings.
In producing a service type of aircraft, the designer is faced with a number of problems other than the usual aerodynamic and structural ones. He has to bear in mind, first and foremost, service requirements such as view, gun accessibility, the placing of service equipment, &c, and while meeting all these, he still has to produce a machine with the highest possible performance, coupled with manoeuvrability, stability and controllability. One might easily add other "ilities," among which has, for instance, been added recently repairability in the field. Thus the production of a modern service type for the R.A.F. is largely an "ilities competition," and many a designer has failed to get his machine accepted not because its performance was inferior to that of other types in the same class, but because one of the "ilities" was not as good as the corresponding one of another machine.
In the Westland "Wizard" single-seater fighter the designers have given expression to original ideas, inasmuch as the machine deviates considerably from what has almost come to be regarded as standard practice in single-seater fighter design in Great Britain. The parasol monoplane arrangement has not been in service with the Royal Air Force since the days of the war when a number of Morane-Saulnier "parasols" were used. Since then all service machines of the single-seater fighter class have been biplanes, or at most "sesquiplanes." How far the Westland designers have been influenced in their choice of wing arrangement by their experience with the "Widgeon" light monoplane we cannot say. At least there is quite a strong "family resemblance" between the "Wizard" and the "Widgeon." It seems likely that the monoplane wing arrangement was chosen chiefly on account of the view, which must be quite exceptionally good in the absence of a bottom wing, and with the pilot placed as he is with his eyes on a level with the trailing edge.
Structurally also the wing arrangement of the "Wizard" must have its advantages in that the rigid rigging of the strut-braced monoplane wing should not require any trueing-up during normal use. The only external wires in the "Wizard" are those in the plane of the wing struts, and as the stresses in them must be quite low, they are not likely to require much attention.
Aerodynamically there is possibly very little to choose between the monoplane and the biplane wing arrangements, especially in a machine with very low power loading and high speed, where induced drag is not a large percentage. By having a monoplane wing, and making that of fairly thick section, it has been possible to "bury" the petrol tanks in the wings, thereby saving fuselage space without adding appreciably to the wing drag, while retaining the advantages of direct gravity feed and reduction in fire risks. The general arrangement drawings and photographs of the "Wizard" show that the fuselage is of very small cross-sectional area and of good streamline form, while the placing of the wing some distance above the rounded top of the fuselage has probably reduced interference drag to a fairly small figure. It should be remembered that the Westland Aircraft Works have their own wind tunnel, and that probably experiments were carried out to determine the effect of the wing arrangement chosen. Altogether the design impresses one as being particularly "clean," and the performance figures given at the end of these notes indicate that the minimum drag of the machine must be very low.

With the exception of the wing, which is of wood in the first machine but will be of metal in subsequent aircraft, the "Wizard" is of all-metal construction. The fuselage is built up of metal tubing mainly of square section, and chiefly of Duralumin, although certain highly stressed members are of steel. In the front portion of the fuselage the struts are arranged to provide the bracing, being in the form of a Warren truss, while in the rear part the bracing is provided by swaged tie rods. The fuselage is in two separate portions, the joint occurring just aft of the pilot's cockpit. The struts in the rear portion of the fuselage are circular-section Duralumin tubes, and fit into "cup" sockets at their ends. These "cup" sockets are attached to the longerons by a single bolt, so that the longeron is pierced but twice at each transverse frame - once vertically and once horizontally.
In the front portion of the fuselage the attachment of the square-section struts to the square-section longerons is by flat flitch plates and tubular rivets, the struts not bedding down on the longerons, but the bearings being provided by the tubular rivets, which are made of sufficient area for the purpose.
The engine mounting is so designed that after removing the cowling, the engine can be lifted out without disturbing the fuselage structure proper. In designing the mounting, the possibility of fitting a supercharged engine has been kept in mind, and the addition of a supercharger to the Rolls-Royce F.XI engine will entail no structural alterations of the "Wizard."
As already mentioned, the wing of the "Wizard" is of normal wood construction in the first machine, but subsequent models will have all-metal wings, about the details of which, however, we are not in a position to give any information. The wing bracing struts are of steel, and incorporate certain patented features in their construction. They run from the lower longerons to the two wing spars, and are approximately parallel, so that bracing wires in the plane of the struts have been employed. The ailerons are hinged to "false" spars, and are of narrower chord at the root than at the tip. They are balanced by shielded horn balances and have been found very effective and light on the controls.
The undercarriage is of normal type, with axle running across and the rear leg of each Vee being the telescopic member. The shock-absorbing gear in the "Wizard" is of the well-known Westland type, using a medium-pressure air chamber and oil dashpot with tapering needle valve.
A tailplane trimming gear of somewhat unusual type is fitted. This is operated by a lever with ratchet stop, and is claimed to be much quicker in operation than the worm-wheel type.
The two petrol tanks, each with a capacity of 34 galls. (155 litres), are mounted in the wing, and the removal of the tanks is very simple as the bolts for the securing clamps are exposed on top and bottom of the wing, so that all that is necessary is to undo the nuts, when the tanks can be dropped out. Direct-gravity feed to the engine is used.
The radiator is of the retractable type, and projects when in the "out" position through the floor of the fuselage just behind the rear undercarriage struts. It has been found that this position has the double advantage of offering a minimum of drag and at the same time keeping the pilot's cockpit well heated.

The pilots cockpit is placed approximately in line with the trailing edge of the wing, and the seat is of such a height that the pilot's eyes are about level with the wing, enabling him to look either over or under the wing. The seat height is adjustable on the ground, and there are two positions of the rudder bar to suit different pilots.
The two machine guns, one on each side, are placed with their feed and locks inside the cockpit and within easy reach, so that in the event of jamming or other non-functioning of the guns, the pilot can see and reach the locks and operating mechanism of both guns without difficulty. 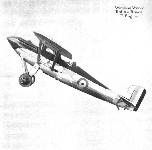 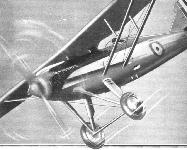