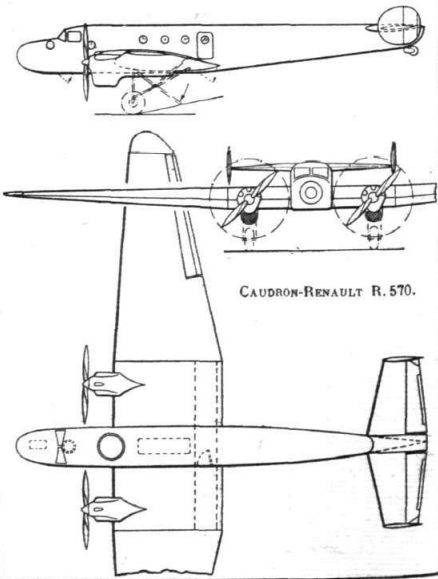 Flight, March 1936
A PAIR of HEAVYWEIGHTS

A PAIR of HEAVYWEIGHTS
Bomber Transport Monoplanes by Caudron-Renault and Dornier: Details of a Machine Built in Quantity for Germany's Air Force

THE British Air Ministry is testing at the moment three large bomber-transport monoplanes ДальшеMore>>> with a view to adopting a new standard type for the R.A.F. This fact adds interest to the following descriptions of the Caudron-Renault R.570 and the Dornier Do.23, which are two Continental types in the same category.
The Caudron-Renault machine is a twin-engined cantilever monoplane with retractable undercarriage, and is designed for use as a bomber, troop carrier, freight transport or ambulance. The crew is composed of a pilot, a navigator (who is also the second pilot and bomb aimer), and a radio operator, all of whom are grouped together in the forward portion of the fuselage.
The R.570 is of composite construction. Its central wing section and the forward portion of the cabin are built up with channel sections and covered with light alloy sheet, while chrome molybdenum steel tubes have been used for the rear portion of the fuselage. The outboard wing panels and the tail unit are of wood with stressed-skin plywood covering, and the control surfaces, of duralumin channel sections, are fabric covered.

The cabin has a circular opening measuring 4 ft. 6 in. in diameter located in the floor aft of the pilots' compartment to permit the loading of heavy pieces of freight, such as spare engines. A second opening affords simultaneous exit for four persons with parachutes. Alternatively, this door can be used for the hoisting of stretchers. There are also two lateral entrances to the fuselage. Compartments are provided for the wireless operator and navigator close behind the cockpit. The post of the bomb aimer is behind these and is fitted with glass panels in the floor. Equipped as an ambulance, the forward portion of the cabin accommodates four patients, while the rear section of the fuselage permits the installation of six stretchers in three rows. Fourteen movable seats can be installed facing forward.
The engines are eighteen-cylinder, water-cooled Renaults of the broad-arrow type, rated at 700 h.p. at 2,050 r.p.m., and giving a maximum of 830 m.p.h.
The cruising speed is estimated to be about 170 m.p.h., and the machine should land at 56 m.p.h. The maximum range against a head-wind of 32 m.p.h. is 690 miles.
<...>