Senior Captain Stefan 'Vador' Darte closes in on the camera ship. Note how the array of four upper interrogator fuselage mounted antennas in front of the canopy, part of the APX-111 advanced identification friend-or-foe system, remain in the standard grey paint.

Captured against the dark tone of the North Sea, this shot shows most of Dark Falcon's design features. Well done to the Belgian Air Force!

Vortices trail from the smoke generator pods carried on each wing tip station during a photo flight over the North Sea.

Since being established at Albacete, 28 flight courses have been held, from which 974 pilots have graduated. There have also been 103 academic courses with 2,865 graduates. 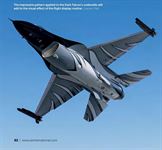 The impressive pattern applied to the Dark Falcon's underside will add to the visual effect of the flight display routine.

Vador dispenses flares to add to the impact of this shot; his display routine involves the use of flares, adding a dramatic effect to the blistering flight routine.

On jacks in the paint shop at Florennes, two of the paint team apply masking to the aft fuselage underside.

Interesting shot of the top side painted with black paint showing the first strips of masking tape applied for the grey and white stripes. 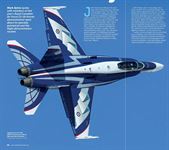 Topside shot of CF-18A 188776 showing the ribbons, lightning bolts and globe.
Looking resplendent in its bright blue, white, red, and grey paint scheme, Royal Canadian Air Force CF-18A Hornet 188776 was unveiled to the public at 4 Wing Cold Lake, Alberta on April 3, 2018. The scheme has been applied to the aircraft to mark the 60th anniversary of the North American Aerospace Defense Command (NORAD).

Thanks to the constant improvement of its software and the integration of new capabilities, the EF-18Ms of Ala 12 and Ala 15 continue to be very capable aircraft when expertly flown.

This shot shows how deceptive the Hornet's mould line is, especially with a fake canopy painted on the underside.

More details of the design, including the titles applied to the flaps, and the maple leaves and stars on the inner face of the vertical stabiliser.

Even with a bright paint scheme, CF-18A 188776 blends in well to the backdrop of a snowy Alberta.

During the first course of this year, Spanish Eurofighters participated as members of the opposing force.

Eurofighters and crews from Norvenich and Neuburg made up the German contingent for the year's first course.

If you study the T-50A for long enough it's fairly straightforward to pick-out some of design aspects inherited from the F-16 Fighting Falcon, and yet many of the T-50A's aspects are considerably different to the F-16.

The second of two Lockheed Martin T-50As based at Greenville, South Carolina, TX-2, during a test flight from the facility. It's notable that both Boeing and Lockheed Martin have painted their respective contender aircraft in the current two-tone colour scheme as used by T-38C Talons assigned to Air Education and Training Command.

This nose-on shot clearly shows the T-50A's forward and mid-fuselage form along with the configuration of the side-mounted air inlets. Note also the head-up display in the forward cockpit and the visibility afforded to the pilot in the aft cockpit; an essential aspect for a trainer aircraft.

A Lockheed Martin crew chief signals the pilot to hold on his brakes while the chocks are pulled from the main wheels of T-50A TX-2 on the Greenville flight line.

Assembly work on T-50A TX-2 underway in the Greenville facility. The two bronze-coloured aircraft seen in the background of this shot are T-50 manufacturing test and demonstration models used by the Greenville team to learn and practice final assembly of the aircraft.

Apart from two Eurofighters assigned to 36s Stormo, the Aeronautica Militare provided as an external asset one of its modern Gulfstream G550 CAEW. This was the type's first participation in an exercise outside Italy.

A three-plane diagram detailing Boeing's design of the conformal fuel tank to be used on the Block III Super Hornet.

France is one of the programme's member nations, with the largest number of participants in the TLP courses. Slot allocation is coordinated during the annual Scheduling Conference for the following calendar year.

Two F-35As assigned to 13° Gruppo undergo final checks before taxiing for a mission at Amendola Air Base.

This shot shows the squadron, wing and national insignia of an Italian F-35A.

Pilot and crew chief during a simulated scramble. Italian F-35A Lightning Ils were first assigned to QRA duty on March 1, 2018.

Two F-35As taxiing at Amendola before an evening mission.

An F-35A taxis out from a shelter.

Pilot and crew-chief during pre-flight checks.

Close-up front view of an F-35A with the nose-mounted window of the AAQ-40 Electro-Optical Targeting System.

A 13° Gruppo pilot signs paperwork for the crew chief after a mission. His flying suite - like the helmet - is specifically designed for the F-35.

Take-off from Amendola made easy by the immense power generated by the Pratt & Whitney F135 engine, the most powerful fighter engine ever developed, rated at 191.3kN with afterburner.

The F-35A cockpit is dominated by the large touch screen display with only a few switches, a side stick controller and the throttle.

Forty years on, the TLP courses are one of the best tactical pilot training opportunities available to aircrew of the NATO nations

Today, missions performed by the P-72 do not require low level flight profiles, as in the anti-submarine warfare mission.

Two sensors of the ATOS system: the black radome houses the Seaspray 7300E radar, and the Star Satire HD electro-optical system on the right.

A P-72A ready to taxi from the main apron used by 41 Stormo at Sigonella.

SATCOM antennas are housed in the white radome a top the aft fuselage.

This version of the ATR-72 is not equipped to perform the anti-submarine warfare mission, but is a very capable ISR and C4I platform.

The P-72's glass cockpit, dominated by two main multifunction displays, is almost identical to the version used on the civil ATR-72-600.

One of the four stations at which mission system operators can recall images from any of the on-board sensors.