F-22 05-4101/TY during a demonstration at Dannelly Field, near Montgomery, Alabama.

An F-22 parked on the flight line on a foggy morning at Langley Air Force Base, Virginia.

Top: A crew chief assigned to the 1st Aircraft Maintenance Squadron based at Langley Air Force Base, Virginia, sweeps debris off an F-22 at Tyndall Air Force Base, Florida on October 18, 2018.
Bottom: This shot shows how much debris collected on the low- observable surfaces of an F-22 during Hurricane Michael.

Top: The backdrop of this shot of a crew chief sweeping debris off an F-22 shows the type of hangar used for aircraft maintenance at Tyndall and its damaged condition after Hurricane Michael.
Bottom: Approximately 40 crew chiefs and avionics specialists assigned to the 1st Aircraft Maintenance Squadron travelled from Langley to Tyndall to assist with returning F-22s to flight operations.

A crew chief tows an F-22 aircraft on the flight line at Tyndall Air Force Base, Florida, Oct. 21, 2018. Ground immediately adjacent to the flight line is strewn with debris torn from buildings during Hurricane Michael.

A selection of legacy aircraft parked on the flight line at Amendola.

After the 558th Flying Training Squadron, students will learn to fly their major weapons system, such as the RQ-4 pictured here, before reporting to their operational squadron.

The Block 5 MQ-9 Reaper variant is equipped with improved electrical and communications systems to provide better software and hardware upgrades for future operations.

An MQ-9 armed with four GBU-38 Joint Direct Attack Munitions parked before a February 2018 mission from Kandahar Airfield, Afghanistan. A key aspect of the training at the 558th Flying Training Squadron involves not just learning to fly, but also foundational knowledge about the principles of employing remotely piloted aircraft for strike missions.

This landing shot of prototype Su-57, T-50-8, shows how slender the main fuselage is.

A close-up shot of the forward fuselage of Su-57 prototype T-50-11, side number 511, equipped with a production standard sensor suite.

A part-pixel camouflage scheme applied to T-50-9, side number 509, seen at Zhukovsky.

Su-57 T-50-9 was one of two deployed to Syria in February 2018; the aircraft is seen taxying at Hmeimim Air Base without corner reflectors fitted.

The author's graphic showing the location of the Su-57's various sensors. 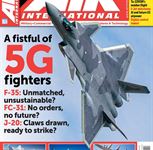 Upper side of J-20 78233 features a two-tone grey camouflage and light grey edges.

The second aircraft is conducting a flight test programme at SAC's Shenyang-Beiling airfield, still unpainted. Even after two years of flight testing, only a few clear images have been released.

The first FC-31 demonstrator was unveiled during the Zhuhai air show 2014 proving China had become the second nation after the United States to have two stealth fighter designs in flight testing at the same time.

The FC-31V2 aircraft undergoing pre-flight checks on December 23, 2016, the date of its maiden flight.

Only a few images of the FC-31V1 under construction have been released.

A rare glimpse to the FC-31V1's cockpit showing a modern layout with large multifunction displays and a wide-angle head-up display.

The future variant's form is unknown though several artist impressions have been posted on Chinese forums. The most credible source is a black coloured model of the naval variant featuring folding wings and an arrestor hook exhibited in SAC's showroom.

An artist's impression of the revised second aircraft was first presented at the Zhuhai air show 2014.

F-35A Lightning IIs assigned to the 388th Fighter Wing over the Utah Test and Training Range on November 19, 2018, during a combat power exercise aimed at verifying the wing's ability to quickly employ a large force of jets against air and ground targets.

Crew chiefs wait alongside their respective F-35A while the pilots run through final system checks outside the barns at Amendola.