Простота конструкции делала M.B.2, что называется, мечтой для авиатехников, но вот пилоты от него в восторге не были.
The first aircraft developed by the newly-formed Martin-Baker Aircraft Co Ltd was the M.B.1 two-seat light tourer, but by March 1936 the company had started building a modern single-seat fighter, the Napier Dagger-powered M.B.2, seen here in 1939, after it had been given the RAF serial P9594. First flown by Valentine Baker on August 3, 1938, the fixed-undercarriage M.B.2 could not compete against the Hurricane and Spitfire, both already in RAF service by that time. 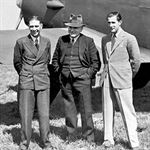 The three founding members of Martin-Baker Aircraft beside the M.B.2 in 1939. From left: Capt Valentine Henry Baker, who was killed in the M.B.2’s successor, the M.B.3, in September 1942; James Martin, who was so affected by Baker’s death that he established Martin-Baker as the world leader in ejection-seat technology, and Francis Francis. 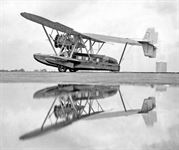 Bearing the name Blue Falcon on its hull and wearing its American registration, NC15V, Francis Francis’s Sikorsky S-38B. After its arrival in the UK in the late spring of 1932, it was registered G-ABYS, as seen on the rear hull in the photograph, taken at Heston in April 1935.

One of a sequence of glass-plate photographs taken of the Blue Falcon at Heston in April 1935, this shows the aircraft having its Pratt & Whitney Wasp engines run up. The S-38B was essentially similar to the S-38A, with more powerful engines and increased fuel capacity. By the time Francis acquired his, some 100 S-38s had been built for various customers.

The distinctive water tower in the background once again marks the location in this photograph as Heston. The amphibian was sometimes referred to as “The Explorer’s Air Yacht”, owing to its popularity with well-off private owners. Sikorsky’s first real commercial success, the S-38 made its maiden flight on June 25, 1928.

Bearing the name Blue Falcon on its hull and wearing its American registration, NC15V, Francis Francis’s Sikorsky S-38B is inspected at an unknown location. After its arrival in the UK in the late spring of 1932, it was registered G-ABYS.

Following its stint in the UK as G-ABYS, the Blue Falcon was sold to French airline Aeromaritime, which was established in March 1935 to provide air services in French West and Equatorial Africa. In March 1936 the S-38 completed the airline’s first reconnaissance flight between Dakar (now in Senegal), Cotonou (Benin) and Pointe Noire (Republic of Congo).

For waterborne operations, the S-38’s undercarriage was retracted by means of an ingenious system in which the rubber-tyred mainwheels were fitted to a hinged axle attached to the hull, the outboard wheel hub being attached to a telescopic tube system, which was hydraulically raised to bring the wheels parallel with the wings.

Minus its outer wings and tailbooms, the S-38 is carefully hoisted from the deck of the RMS Berengaria to the dock at Southampton on its arrival from the USA in the late spring of 1932. At this point it was still registered in the USA as NC15V, and there appears to be conflicting evidence about when its UK registration was applied.