Rather similar in lines to the BD-5 series was the British Planet Satellite of 1948. It was a four-seater powered by a 250 h.p. D. H. Gipsy Queen in the tail and was constructed of magnesium alloy. It never flew and was dismantled and melted down. 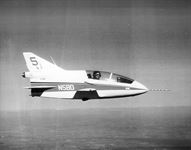 Two BD-5Js of the Bede Jet Team in close formation at this year's Reading Show in the USA.

Two close-ups of the tail unit, with the upper photograph depicting the earlier, highly swept type, and, below, the now-standard tail. 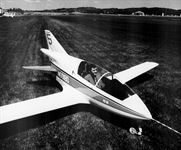 Designer Jim Bede with the moulded fuselage of the prototype BD5. This method of construction was only used on this aircraft and has since been abandoned.

A close-up of the tail arrangement in the prototype BD-5 with original butterfly tail.

James Bede with a prototype BD-5B Micro single-seat light aircraft
A BD-5 shown complete and in component form as received by the build-it-yourself customer.

The BD-5J 0001 flying from the Bede headquarters at Newton, Kansas, with the “guv'nor” at the controls.
Prototype Bede BD-5J single-seat homebuilt aircraft (200 lb st Sermel TRS 18 turbojet engine), the jet-powered version of the Micro

Two more views of the original configuration of the prototype BD-5-01. In the lower photograph Jim Bede gives some impression of the size of the aircraft. The wings can be detached in two minutes, the long and short wings being interchangeable. 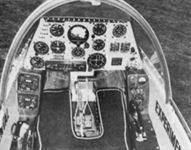 The cockpit and panel of the jet powered BD-5J.

The cockpit and panel of BD-5-0002. Note how the control column is offset to starboard. The rudder pedals are situated in the extreme nose, glider fashion, the pilot having to sit with legs outstretched.