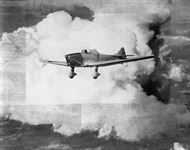 The Miles M14 Magister L5933 Two-seat Training Monoplane (130 h.p. "Gipsy-Major" engine) with the blind flying hood over the rear cockpit.
MAJESTY AND MAGISTER: A production-type Miles Magister with Gipsy Major engine set against a background of the kind which is the raison d'etre of the blind-flying "bonnet" over the rear cockpit. The Magister is really an improved Hawk Trainer.

A shot of N3801 which displays the tall rudder.

Hawk Trainer III G-AEZS as U6, while fitted with the thick-sectioned M.18 wing.

L6894 in a similar condition, showing its deep-chord rudder.

Magister L5916, one of the M14s for the CFS aerobatic flight, displays its red and white upper surfaces and the early form of empennage.