The first Seafarer, G-ACCV, during an early air test a month later. 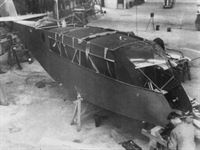 "GOING WESTWARDS": The two "Gipsy Major" engines of the Seafarer must have disturbed the peasants of this part of Ireland, as Mr. and Mrs. Mollison flew at low altitude on their way to the Atlantic Ocean.
Seafarer keeping low over the Irish coast on course for the Atlantic, July 22, 1933.

Last minute speeches from Jim and Amy at Croydon in the early hours of June 8, 1933, moments before the disastrous take-off 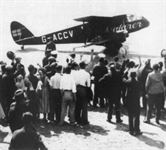 THE START: Seafarer just after taking off from Pendine Sands.
A few seconds later, with 39hr of flying ahead of them.

The disastrous take-off, which postponed the Atlantic flight for six weeks.

The end of the trail, G-ACJM at Hamble on August 12, 1934, after its crash landing. It never flew again.